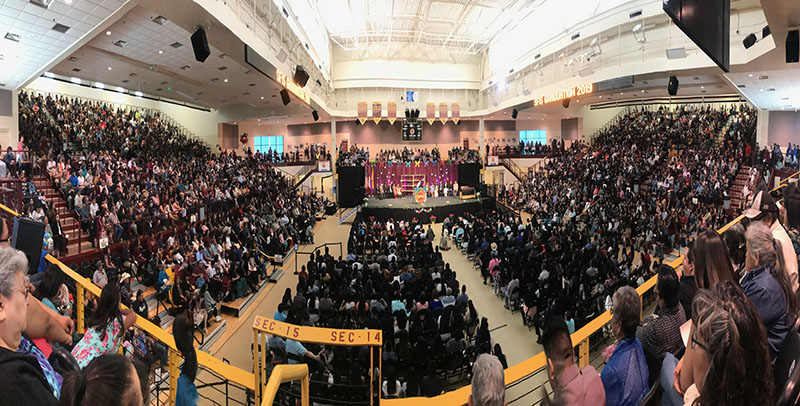 A panoramic view of more than 4000 in attendance at President Dr Sangay’s commencement at Santa Fe Indian School. Sikyong Office

The announcement comes on the day the President of the Tibetan-government-in-exile, officially known as Central Tibetan Administration (CTA) gave a rousing commencement speech at the Santa Fe Indian School’s 2019 graduation ceremony which earned him a standing ovation, according to the Sikyong Office.

The proclamation begins by recognizing His Holiness the 14th Dalai Lama’s visit to the city and the high school back in 1991-a true testament that His Holiness forever touches the lives of people he meets.

Recognizing the 27 years of friendship and cultural exchanges between Santa Fe Indian School and the Tibetan People, It states that it hopes the relationship will continue and “foster a deep understanding and mutual support for self-determination, language and cultural preservation and friendship.’’

The 2019 class of Santa Fe Indian School erupted into cheers and standing ovation Friday morning as they welcomed the stirring yet humble words of the Tibetan President Dr Sangay who delivered the commencement speech at the all Native American schools’ 42nd graduation commencement.

“As a Tibetan, I share something very common with all of you. I grew up underprivileged like many of you. And I have the obligation to lead the movement of my people, just like you,” Dr Sangay added.

To the 4000-strong audience of native Americans, he said, “You all will go on to become successful professionals but all of you have to return home and serve your people because if you don’t, who will?

“Returning home and serving your community should be your primary goal. That’s how you empower yourself, that’s how you become successful,” the President told the crowd.

The democratically elected leader of the Tibetan people reminded them that human societies have been grappling with repression, discriminations and humiliation for many decades and centuries and asked them not to feel discouraged and dispirited.

“You should feel proud of your identity but your pride should be with humility and you should serve with determination and resilience,” the Tibetan leader added.

A symbolic gift was presented to President Dr Sangay by the Santa Fe Indian School, New Mexico where the head and other officials of the School greeted him warmly at the 2019 Graduation ceremony.