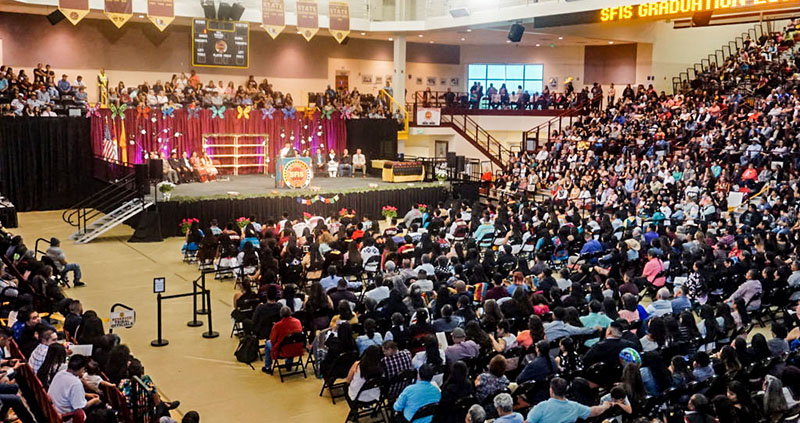 Santa Fe, New Mexico— The 2019 class of Santa Fe Indian School erupted into cheers and standing ovation Friday morning as they welcomed the stirring yet humble words of President of Central Tibetan Administration, Dr Lobsang Sangay who delivered the commencement speech at the all Native American schools’ 42nd graduation commencement.

According to Tenzin Lhakmon, Communication Officer of Sikyong Office, the likes of His Holiness the Dalai Lama and former First Lady, Michelle Obama have been invited as commencement speakers in the past at Santa Fe Indian School.

In a powerful speech that called on graduates to return to and serve their community, President Dr Lobsang Sangay shared moving personal anecdotes, offered practical lessons from Buddhist philosophy and challenged the students to tackle everyday realities of discrimination, repression and humiliation.

“As a Tibetan, I share something very common with all of you. I grew up underprivileged like many of you. And I have the obligation to lead the movement of my people, just like you,” said Dr Sangay.

Born in a poor family in a remote village in East India, Dr Sangay shared his journey from rearing animals and milking cows in Darjeeling, supporting his college education through small businesses, scholarship at Harvard Law School with sheer persistence and hard work and finally rose to become the highest political leader of the six million Tibetans.

“From a small village in refugee camp with two or three cows and a dozen chicken; that was our livelihood. Growing up , I used to go to forest to cut wood, milk cows and spent many winters without shoes…” he said. “When someone tells me that it’s very difficult and impossible to achieve, I get very excited.”

Building on his personal journey as a Tibetan refugee, the President offered important lessons on beholding one’s roots while being ambitious, determined and confident individuals.

“I left my air conditioned office at Harvard and substituted Starbucks with Indian chai. But I love this job because it’s a privilege and honour for me to serve my people. And that’s why I left America and my high paying job to be the leader of the Tibetan people.”

To the 4000-strong audience of native Americans, he said, “You all will go on to become successful professionals but all of you have to run and serve your people because if you don’t, who will?

“Returning home and serving your community should be your primary goal. Thats how you empower yourself, thats how you become successful.”

He reminded them that human societies have been grappling with repression, discriminations and humiliation for many decades and centuries and asked them not to feel discouraged and dispirited.

“You should feel proud of your identity but your pride should be with humility and serve with determination and resilience,” he said.

President Dr Lobsang Sangay concluded his speech by encouraging the Santa Fe graduates to “succeed in life and bring prosperity for their tribe and nation.”

He closed off with an endearing story of his late uncle who celebrated his achievement by offering a red carpet and Dr Sangay, in turn, extended the same red carpet to the graduates as a good luck for their success.

“I was the only member in the family who received doctorate degree. He told me, ‘Among all my niece and nephews they will be able to go to college and get a doctorate degree. You are the only one who has made it so I will give you red carpet welcome.’ When I visited him, outside the door, there was a red carpet and two buckets fulled with water. As per our tradition, it’s very auspicious. I was so moved because at least family members are very proud of what I have achieved.”

“Today I extend the same red carpet to you all as an elder. I hope and pray that you will walk on this red carpet and you will succeed in life, bring prosperity, happiness for your family, your tribe and your nation,” Dr Sangay concluded.