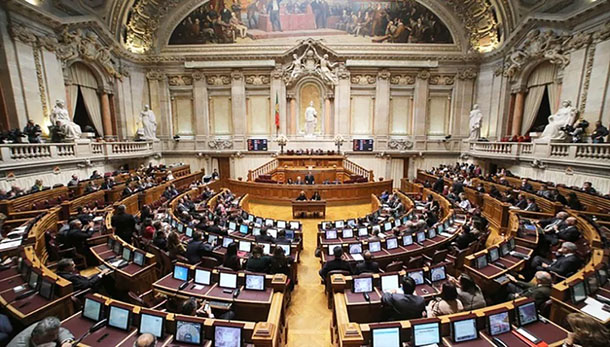 A general view of the Assembly of the Republic during the opening session in the first biweekly debate of the year, in Lisbon, Portugal. 11th Jan, 2019. Credit: SOPA Images Limited/Alamy Live News

Lisbon, Portugal — The Assembly of the Republic of Portugal on Tuesday condemned “the forced disappearance of the world’s youngest political prisoner,” the 11th Panchen Lama and urged António Costa, Prime minister of "the Portuguese Government to appeal to the Chinese Government for his release.”

In a first of its kind The Assembly of the Republic of Portugal on Tuesday condemned “the forced disappearance of the world’s youngest political prisoner,” the 11th Panchen Lama and urged “the Portuguese Government to appeal to the Chinese Government for his release,” according to the Office of Tibet, Brussels and Tibet Support Group, Portugal.

"Called a Vow of Condemnation and Preoccupation with regards to the 11th Panchen Lama, the document was presented to the parliament yesterday by Mr Silva, a Tibet supporter of PAN Party (People-Animals-Nature) and was adopted today with 29 votes in favour and 19 against," the Office of Tibet, Brussels said.

"Only the Communist Party voted against it. The PS (Socialist Party), PSD ( Social Democrat), CDS-PP (Christian Democrat) and PEV (The Greens) abstained," it added. The Advisory assumed a “conviction vote and concern for the 24 years of forced disappearance” of Gedhun Choekyi Nyima which was presented by the PAN (People-Animals-Nature) Party.

With this vote, “the Assembly of the Republic, meeting in plenary session, condemns the forced disappearance of the world’s youngest political prisoner, the 11th Panchen Lama, and expresses its concern at the lack of knowledge of his whereabouts and his physical, mental and emotional, urging the Portuguese Government to appeal to the Chinese Government for their release. ”

In the introductory text of this vote, the PAN stated that “on May 14, 1995, Gedhun Choekyi Nyima, aged six, was recognized by the Dalai Lama as the reincarnation of the Panchen Lama, the second most important religious leader in Tibet”, but “Three days later, on May 17, Gedhun and his family disappeared, taken away by the Chinese authorities.”

“China has justified its disappearance, claiming that it was for its own protection against ‘separatist’ forces.” For more than two decades the Chinese government has refused requests from UN human rights experts and governments, access to Gedhun Choekyi Nyima and his family to check their health and well-being, “adds the PAN.

At the end of 1995, the People’s Republic of China designated another child, Gyaincain Norbu, as the “official” reincarnation of the 11th Panchen Lama. The PAN – which in this legislature has for the first time an elected Member André Silva – noted that “in 2013 the UN Committee on the Rights of the Child expressed its concern about the 11th Panchen Lama” and asked China to “immediately allow an independent expert to visit him”, but without success.

The PAN pointed to the disappearance of Gedhun Choekyi Nyima as “a gross and flagrant violation of human rights and fundamental freedoms”, which violates the United Nations Convention for the Protection of All Persons from Enforced Disappearance”.

While sharing this ‘good news’ with Representative Tashi Phuntsok, Ms Alexandra Correia, Coordinator, Tibet Support Group, Portugal (Grupo de Apoio ao Tibete-Portugal) said that she was most pleased with this advisory legislative work though non-binding. She said such a thing has never happened before in Portugal. Given the extreme Chinese influence with the parliamentarians since 2008, evident from the large abstention, she rejoiced at this as ‘a good sign’.

To many Tibetan people, he is a figure who commands deep respect and reverence. To the Chinese government, which has occupied Tibet since invading it in 1950, the young Panchen Lama was a potential threat to their rule. The Chinese government rejected the Dalai Lama's candidate as "illegal and invalid" and, six months after Gedhun's abduction, China announced that it had found the "real" reincarnation. They named Gyaltsen Norbu, a Tibetan boy and the son of two Communist Party members, as the Panchen Lama.

Since his selection, Gyaltsen, who lives in Beijing, has only rarely visited Tibet. His visits are carefully stage-managed and heavily policed and Tibetans still refer to him as the 'Panchen Zuma', or 'false Panchen'. Gyaltsen Norbu is a member of the Chinese People’s Political Consultative Conference (CPPCC), a top advisory body to China's government and a senior figure in China’s state-run Buddhist Association. In a speech in 2015, he vowed to uphold "national unity" - the Chinese government's term for opposing any change in Tibet's status.

The abduction and replacement of the Panchen Lama is part of China's efforts to 'stabilise' Tibet by controlling its religion and breaking the Dalai Lama's influence. Not only are they attempting to use their puppet Panchen Lama to control and influence Tibetans today, but when the time comes to find the reincarnation of the Dalai Lama they will use him to try and legitimise the appointment of their own pro-China candidate as the next leader of Tibetan Buddhism.