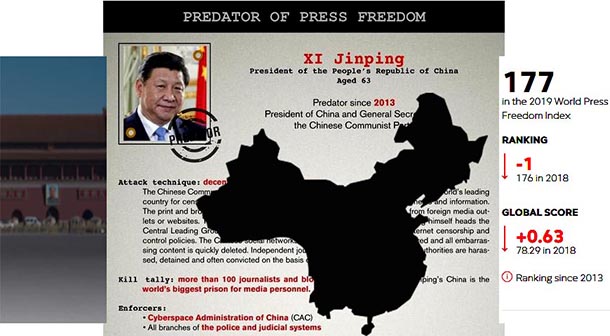 By relying on the massive use of new technology, President Xi Jinping has succeeded in imposing a social model in China based on control of news and information and online surveillance of its citizens. Photo: TPI

Paris, France — Tightened political controls in China caused the authoritarain Chinese regime controlled regions, including China, Eastern Turkistan, Inner Monglia and Tibet to see further declines in press freedoms during the last year, with dropping another point to 178 in a 180-country ranking released by the Paris based international press freedom watchdog known as Reporters Without Borders (RSF) on Thursday.

"With totalitarian propaganda, censorship, intimidation, physical violence and cyber-harassment, the Asia-Pacificregion continues to exhibit all of the problems that can beset journalism and, with a virtually unchanged regional score, continues to rank third from last," the RSF said.

"In each country, the ruling elite suppresses all debate in the state-owned media while cracking down relentlessly on citizen-journalists who try to make a dissenting voice heard,” the Paris-based monitoring group said in its 2019 annual report.

"Conversely, two countries already festering near the bottom of the Index – China and Vietnam – both managed to fall another place, to 177th and 176th respectively, because of the monopoly of power exercised by their presidents, Xi Jinping and Nguyen Phu Trong," the report said.

The report said that "the first amended the constitution in order to be “president for life” in March 2018. The second now heads both the Communist Party and the state. In each country, the ruling elite suppresses all debate in the state-owned media while cracking down relentlessly on citizen-journalists who try to make a dissenting voice heard."

China’s anti-democratic model, based on Orwellian high-tech information surveillance and manipulation, is all the more alarming because Beijing is now promoting its adoption internationally. As well as obstructing the work of foreign correspondents within its borders, China is now trying to establish a “new world media order” under its control, as RSF showed in its latest report on China.

The RSF said "Laos also fell one place to 171st, above all for preventing journalists from covering the dramatic collapse of a dam in July 2018." It said 'These one-party states are inexorably drawing closer to their North Korean “brother”, which managed a miniscule one-place rise to 179th thanks to the semblance of an opening as a result of the summits that brought Supreme Leader Kim Jong-un and President Trump together.'

In Cambodia, a country under growing influence from China, suppression of independent media in the run-up to a national election last year has left 30 radio stations shut down and newspapers unsympathetic to Prime Minister Hun Sen either closed or taken over by pro-government business figures.

“Cambodians now only have access to news provided by major media groups directly linked to Hun Sen, such as the online news agency Fresh News, which pumps out pro-government propaganda,” Reporters Without Borders said.

The report also pointed out that there is a 'growing censorship and self-censorship' around the world. While the islands of press independence are under attack, the Chinese system of total news control is increasingly serving as a model for other anti-democratic regimes such as Singapore (151st), which has established self-censorship as the norm, Brunei (152nd, -1) and Thailand (136th).

Similarly, censorship has become the norm in Cambodia (143rd), where the government has eliminated all independent media, and Hong Kong (73rd), where the leading traditional media now receive pressure to comply with Beijing’s dictates.

In the absence of editorial independence vis-à-vis the authorities, Papua New Guinea (38th) and Tonga (45th) also saw an increase in self-censorship in 2018. In Pakistan (142nd, -3), the military establishment’s harassment of the media in the run-up to the general election in July 2018 resulted in an increase in censorship comparable to the worst moments during Pakistan’s military dictatorships.

'By relying on the massive use of new technology, President Xi Jinping has succeeded in imposing a social model in China based on control of news and information and online surveillance of its citizens.'the RSF report said.

At the same time, he has been trying to export this oppressive model by promoting a “new world media order” under China’s influence. China’s state and privately-owned media are now under the Communist Party’s close control while foreign reporters trying to work in China are encountering more and more obstacles in the field,'it added.

The report said 'more than 60 journalists and bloggers are currently detained in conditions that pose a threat to their lives. Liu Xiaobo, a Nobel peace laureate and winner of the RSF Press Freedom Prize, and Yang Tongyan, a dissident blogger, both died in 2017 from cancers that were left untreated while they were detained. Under tougher Internet regulations, members of the public can now be jailed for the comments on a news item that they post on a social network or messaging service or even just for sharing content.'

It is two points less than the previous year's index with authoritarian regimes increasingly reinforcing their control of the media, said RSF. "If the political debate slides surreptitiously or openly towards a civil war-style atmosphere, in which journalists are treated as scapegoats, then democracy is in great danger," RSF Secretary-General Christophe Deloire said.