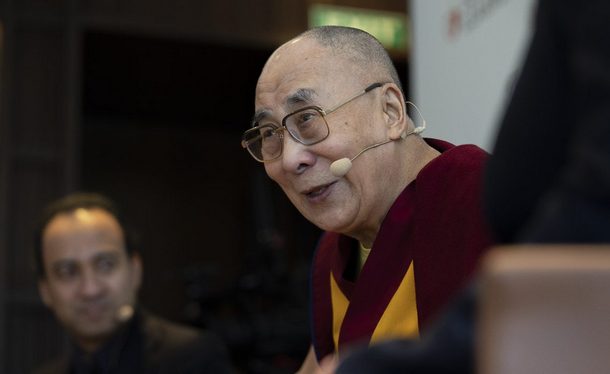 His Holiness the Dalai Lama responding to a question from the press during the meeting with members of the media to announce the global launch of SEE Learning in New Delhi, India on April 4, 2019. Photo by Tenzin Choejor

New Delhi, India — The spiritual leader of Tibet, His Holiness the Dalai Lama reiterated that he is not seeking independence for Tibet, but would prefer a "reunion" with China under mutually acceptable terms.

"I prefer Tibet remain within the zone of China. Some kind of reunion," the Nobel Peace Prize Laureatesaid, added that "Chinese and Tibetans could live side-by-side, with China helping Tibetans economically and gaining from their knowledge."

His Holiness the Dalai Lama's comments came during a press conference in India's Capital city New Delhi with members of the press representing print, broadcast and online consumer media. He was in the city on Thursday for the Global Launch of the Social, Emotional and Ethical Learning (SEEL) program developed at Emory University, Atlanta, Georgia, USA.

The 83-year-old spiritual leader of Tibet has been living in exile in India since a failed 1959 national uprising against the Chinese totalitarian and resppresive rule in Tibet. His Holiness said he developed direct contact with the Chinese leadership in 1979, but little progress has been made since because China still thinks he is seeking independence for Tibet.

In last month, tens of thousands of Tibetans and their supporters took to the streets across the world to mark the 60th anniversary of the March 10, 1959, Tibetan Uprising against China's illegal invasion of Tibet, started in 1949.

China claims Tibet has been part of its territory. In response to China's claim, people of Tibet insist Tibet was historically a sovereign independent nation for centuries and but the Chinese Communist totalitarian regime began their invasion of Tibet in 1949, reaching complete occupation of the country in 1959.

Since that time, more than 1.2 million people, 20% of the nation's population of six million, have died as a direct result of China's invasion and occupation. In addition, over 99% of Tibet's six thousand religious monasteries, temples, and shrines, have been looted or decimated resulting in the destruction of hundreds of thousands of sacred Buddhist scriptures.