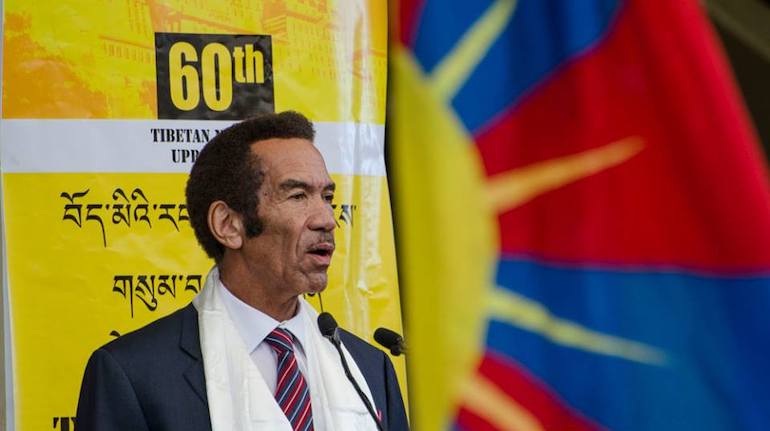 Dharamshala, India — "With such a mindset and the power of your collective determination, your own victory is ultimately certain,” said Dr Ian Khama, former President of the Republic of Botswana, to mark the 60th anniversary of the Tibetan national uprising day, in Dharamshala, India, on March 10, 2019.

The historic event was atteded by leaders from 11 nations, ten parliaments and 60-member Chinese intellectuals from Taiwan, proper China and abroad to mark the 60th anniversary of the Tibetan National Uprising Day. The event was organised by the Central Tibetan Administration (CTA). In 1959, thousands of Tibetans-united by the indomitable Tibetan spirit- staged a defiant in the Tibetan capital Lhasa, yet peaceful nationwide uprising against the illegal occupation of Tibet by the People’s Republic of China. In the following days and weeks, the Chinese military brutally suppressed the peaceful uprising resulting in the death of tens of thousands of Tibetans.

The 60th commemoration of the Tibetan Uprising Day was graced by Dr Seretse Khama Ian Khama, former President of the Republic of Botswana and participated by a galaxy of Parliamentarians and Chinese intellectuals from across the world. “Our own presence here today is testament to the fact that while the March 10 patriots were physically defeated, the spiritual struggle for a Free Tibet lives on in the hearts and minds not only of Tibetans at home and in exile, but also among growing numbers within the international community,” said Dr Ian Khama who was chief guest of the historical function.

“Let me begin by affirming that it is truly an honour for me to have been invited by the Central Tibetan Administration to be with you today, as the “Chief Guest” on this occasion commemorating the 60th Anniversary of the Tibetan people’s National Uprising. I am sure that I speak for the many other distinguished international guests and supporters who are also here with us in Dharamshala in saying that we are representative of a worldwide community who have not, and shall never, forget the suffering endured by Tibetans as they peacefully pursue their struggle to once more live in freedom in their ancient homeland."

"In global solidarity, we too find it necessary to recall that it was on this day, back on the 10th of March 1959, that unarmed Tibetans from all walks of life rallied in Lhasa to protect His Holiness the Dalai Lama; sparking spontaneous protests against the increasingly oppressive hegemony being practiced by the authorities of the Peoples Republic of China (PRC)," he said, adding: "The ensuing violent crackdown of these initial protests only served to fuel what became a mass uprising against the forces of occupation."

"Six decades later it is abundantly clear that the March 10 protesters were motivated by a collective determination to uphold Tibet’s ancient and unique national identity and cultural heritage, as well as protect their spiritual and temporal leader. In their actions they like so many other patriots across time exercised their fundamental desire to uphold their own true identity, which is the universal right of all communities," said the Botswana's former president.

"As we are all undoubtedly aware, the March 10 uprising was suppressed by overwhelming military force, forcing His Holiness the Dalai Lama along with some 80,000 followers to find refuge here in India. I wish to take this opportunity to commend the successive Governments and the People of India for hosting you here all these years," Dr Ian Khama said.

"Our own presence here today is testament to the fact that while the March 10 patriots were physically defeated, the spiritual struggle for a Free Tibet lives on in the hearts and minds not only of Tibetans at home and in exile, but also among growing numbers within the international community. Coming as I do from a region that suffered colonial occupation, whose own indigenous cultural identity and struggle for political emancipation were likewise long suppressed, I cannot help but empathise with the continued travails and ongoing peaceful resistance of Tibetans as they seek to reclaim their sovereign dignity.

"The fact that the Tibetan struggle, as reflected in the teachings and diplomacy of His Holiness the Dalai Lama, as well as manifested in the political outreach of the Central Tibetan Administration, continues to be based on the “Middle Way” doctrine of non-violence and dialogue ultimately aimed at reconciliation with the Chinese state is truly remarkable given the extreme repression Tibetans have endured, in both the Maoist and post-Mao eras.

Here I note that a recent Freedom House survey report cited Tibet as the second least free place in the world, being listed only after Syria. Similarly, I observe that the European Union Parliament in a 2015 Report on EU-China Relations expressed its own dismay over the continued lack of religious, social and political freedom inside Tibet."

"In addition to these and many other prominent expressions of international concern, it may be further noted that in recent years many environmental scientists from around the world have become increasingly focused on the importance of Tibetan Plateau, which contains the world’s third largest ice reserve (after the Arctic region and Antarctica) being the source of ten of Asia’s major rivers.

In this context, there is an emerging global consensus about the wider risks posed by Tibet’s environmental degradation due to such factors as the extensive damming of rivers and deforestation. As an ardent conservationist myself, I welcome the fact that Central Tibetan Administration has for its part actively engaged the world community on environmental issues through Ten Point Action document, which urges the international community through the United Nations, as well as the Chinese government, to focus on measures to protect it as the “Roof of the World” for the good of humanity.

"As we stand in support for a free generation of Tibetans we are cognizant of the fact that those who dare speak up inside Tibet about issues of religious freedom and environmental rights are being targeted for political prosecution. We note that the mere possession of the image of His Holiness the Dalai Lama remains punishable as a serious criminal offence. We are painfully aware that the surviving repositories of Tibetan Buddhist culture are tightly monitored, while monks and nuns still face expulsion and prosecution if they fail to denounce their spiritual leader.

The same sanctions of course also face others who endeavour to assert their national, democratic and religious rights inside the PRC, as reflected in the growing international outcry over of the plight of the local Muslim Uyghur population living in Xinjiang Province just north of Tibet. While the authorities in Beijing may have the power to suppress basic freedoms within their own jurisdiction they should not be allowed to exercise the same repressive authority outside of their borders including illegal territorial claims in the South China Sea.

It was for this reason that in 2017, when I was still President of Botswana, we refused to give into Chinese government pressure when they threatened us if we failed to bar His Holiness the Dalai Lama from entering Botswana. At the time he had been scheduled to speak at a Mind & Life Institute conference convened at a tertiary institution in our capital city Gaborone, whose theme focused on shared Human Values as reflected in the Southern African ideals of “Botho/Ubuntu”.

"Unfortunately, notwithstanding our principled stand, in the end, His Holiness the Dalai Lama was unable to attend the gathering, which otherwise attracted esteemed participants from the region and beyond. Personally I had looked forward to what I am sure would have been an enriching engagement between His Holiness and some of the bright minds from my own country and continent on their perspectives about the convergence of the core Buddhists principles of unity, peace and compassion with our own humanist Setswana norms of Botho, which are based on tolerance, mutual respect and action through consultation.

More broadly, I believe that as originally conceived the conference would have been a golden opportunity to expose the Dalai Lama to the time honoured wisdom of Africa, as well as Africans to the philosophy of the Dalai Lama. Perhaps this is why the very notion of His Holiness setting foot on the Mother Continent is so feared by his opponents. He said that "the Dalai Lama’s busy schedule of teaching here and around the world, along with his prolific writings have established him, as a truly global icon for the power of human liberation and compassion. It is little wonder then that international polling in recent years has consistently placed him among the world’s most admired individuals.

It therefore defies logic that some still believe that his influence can be diminished by seeking to deny others the opportunity of his physical presence. Such provocations rather only serve to diminish his would be censors in the eyes of the world as they embark upon human rights violations daily. In an age of global communications, including greater South-South exchange, this has simply resulted in greater curiosity about his humanitarian work and advocacy. In this way, the persistent efforts to block the Dalai Lama from ever coming to Africa have merely raised his profile across our continent."

"As much as I share in the global respect that has been earned by the Dalai Lama by his tireless outreach, I am also mindful that I am here today as the guest of a much greater community of exiles. Like India my own country of Botswana has often served as a place of refuge for those fighting the forces of oppression. From the Namibian refugees fleeing into Botswana to escape the genocidal German occupation of their country at the beginning of the 20th century to the many other freedom fighters, including Nelson Mandela, who were forced to follow them to escape the clutches of the enforcers of Apartheid and continued colonial rule, which once held sway in our region.

At the time of our independence back in 1966 my own country was surrounded by such racist regimes that seemingly dwarfed us in terms of their military and economic power. Living as we did in the shadow of Apartheid many thought that there was little prospect for us to enjoy the fruits of our sovereignty by pulling ourselves up from our status as being among the world’s least developed countries."

"Neither did many in the world see any immediate likelihood that the growing numbers of exiles then living within our borders and elsewhere in the region would be able to return. But return they did. Like Tibetans the once oppressed peoples of Southern Africa proved resilient in their determination to achieve a better future for themselves. Like Tibetans they too remained dauntless in the pursuit of their own liberation while reaching out and finding support from the international community.

Popular sayings at the time were: “The struggle continues, but victory is certain” and “Power is ours.” This then Ladies and Gentlemen is my message of hope for the people of Tibet. While your own struggle has been long and painful, you can take solace in the fact that in your hearts you remain undefeated, in your minds you are already liberated. With such a mindset and the power of your collective determination, your own victory is ultimately certain. I thank you all for your attention and God bless."