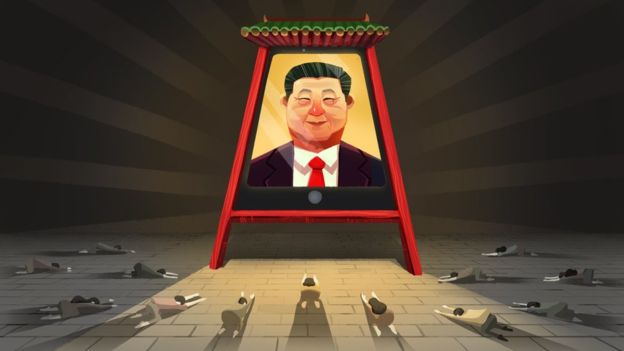 As the censors shut down dissent, the party is urging a way of thinking about all that's good in China and tracing it back to a single source - Xi Jinping. Photo: BBC News

Paris, France — "China remains the world’s biggest jailer of journalists with 60 currently held, of whom three quarters are non-professional journalists," The Paris-based world press freedom watchdog "Reporters Without Borders" said adding: The communist regime "has been near the bottom of RSF's World Press Freedom Index for years and is currently ranked 176th out of 180 countries."

A total of 80 journalists were killed this year, 348 are currently in prison, and 60 are being held hostage, according to the annual worldwide round-up of deadly violence and abusive treatment of journalists released today by Reporters Without Borders (RSF), which shows an unprecedented level of hostility towards media personne.

The RSF stressed that its "round-up figures have risen in all categories. Murders, imprisonment, hostage-taking and enforced disappearances have all increased. Journalists have never before been subjected to as much violence and abusive treatment as in 2018."

"This year has been marked by the number of journalists in all categories who were killed in connection with their work, a figure which increased by eight percent to 80, and by the 15 percent rise in the number of professional journalists killed, from 55 in 2017 to 63 this year," the press freedom watchdog said in a statement dated December 14, 2018, adding: "This number had been declining over the previous three years."

"The widely reported murders of Saudi columnist Jamal Khashoggi and the young Slovak data journalist Ján Kuciak highlighted the lengths to which press freedom’s enemies are prepared to go. More than half of the journalists killed in 2018 were deliberately targeted," the statement reads.

“Violence against journalists has reached unprecedented levels this year, and the situation is now critical,” RSF Secretary-General Christophe Deloire said. “The hatred of journalists that is voiced, and sometimes very openly proclaimed, by unscrupulous politicians, religious leaders and businessmen has tragic consequences on the ground, and has been reflected in this disturbing increase in violations against journalists.

“Amplified by social networks, which bear heavy responsibility in this regard, these expressions of hatred legitimize violence, thereby undermining journalism, and democracy itself, a bit more every day.”

With the release of its latest World Press Freedom Index in April, RSF had already expressed alarm over an increased level of hostility towards the media encouraged by politicians, as well as efforts by authoritarian regimes to export their alternative vision of journalism.

"The number of journalists detained worldwide at the end of the year – 348 – is up from 326 at this time last year. As in 2017, more than half of the world’s imprisoned journalists are being held in just five countries: China, Iran, Saudi Arabia, Egypt, and Turkey," the RSF said, adding: "China remains the world’s biggest jailer of journalists with 60 currently held, of whom three quarters are non-professional journalists."

The number of journalists currently held hostage – 60 – is 11 percent higher than this time last year, when it was 54. All but one are being held in three Middle Eastern countries: Syria, Iraq, and Yemen. They include six foreign journalists.

Despite the Islamic State’s defeat in Iraq and retreat in Syria, little information has emerged about the fate of these hostages, except for Japanese journalist Jumpei Yasuda, who was freed after three years of captivity in Syria. A Ukrainian journalist is still being held in the self-proclaimed “Donetsk People’s Republic” by the authorities who accuse him of spying. RSF also registered three new cases of journalists disappearing in 2018, two in Latin America and one in Russia.

Compiled by RSF every year since 1995, the annual round-up of abusive treatment and deadly violence against journalists is based on precise data. We gather detailed information that allows us to confirm with certainty or a great deal of confidence that the death, detention, abduction or disappearance of each journalist listed was a direct result of their journalistic work.

RSF is an international non-governmental, non-profit organization with a recognized public interest function that has consultative status with the United Nations, UNESCO, the Council of Europe, the International Organization of the Francophonie and the African Commission on Human and Peoples’ Rights.