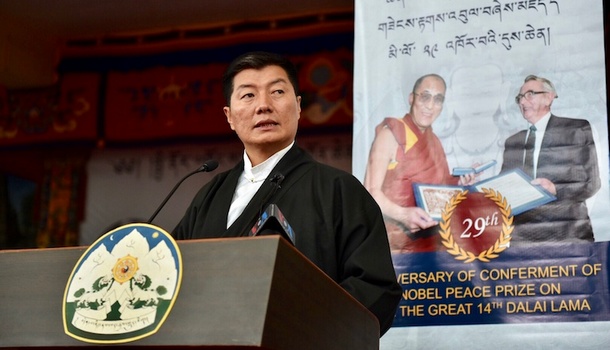 President Dr Lobsang Sangay delivering the statement of Kashag on the 29th Anniversary of Conferment of the Nobel Peace Prize on His Holiness the Great 14th Dalai Lama of Tibet, December 10, 2018. Photo: CTA/DIIR

Dharamshala — "China should accept His Holiness’ Middle Way Approach under which Tibetans seek a genuine autonomy within the framework of the Chinese Constitution. This is a win-win proposition in resolving the issue of Tibet," Tibetan President Dr Lobsang Sangay Monday said, adding: "Until the Chinese government respects the fundamental rights of the Tibetan people, China will not gain respect from the international community."

Thousands take part in function commemorating 29th Anniversary of Nobel Peace Prize conferment to the spiritual leader of Tibet His Holiness the Dalai Lama and the 70th International Human Rights Day, in Dharamshala, India, on December 10, 2018. The celebration included official statements by the Tibetan government in-Exile and the Tibetan Parliament in-Exile. Performers, both young and old, came to the temple to present a traditional series of songs, dances and formal offerings for the continuing good health and long life of their spiritual leader.

In a statement, President Dr Lobsang Sangay on behalf of the "15th Kashag of the Central Tibetan Administration (CTA) expresses its deepest gratitude and bows down to our most revered leader His Holiness the Great 14th Dalai Lama of Tibet. Twenty-nine years ago, His Holiness was awarded the Nobel Peace Prize in recognition of his non-violent campaign for over nearly 40 years to restore freedom for Tibetans in Tibet".

President recalled a quote about His Holiness' acceptance speech on receiving the Nobel Peace Prize: “No matter what part of the world we come from, we are all basically the same human beings. We all seek happiness and try to avoid suffering. We have the same basic human needs and concerns. All of us human beings want freedom and the right to determine our own destiny as individuals and as peoples.”

"His Holiness’ simple, yet powerful words resonate loudly in today’s political discourse and in the beliefs of many people. The little boy from the remote Taktser village in Amdo would go on to touch the hearts of millions because of his kindness and his staunch commitment to non-violence. From ordinary people to the world’s most influential leaders, His Holiness’ teachings are practised as a way of life and a way to achieve peace and harmony among all human beings," the statement reads.

"At present, His Holiness devotes much of his efforts towards reviving the ancient Indian Nalanda tradition. His Holiness engages in discussion with renowned scientists to understand the working of mind and emotion and how this study can be incorporated into modern education to ensure genuine happiness for generations to come. Time and again His Holiness has stressed the importance of studying the Nalanda tradition, irrespective of differences in faith," President said, adding: "The Central and State governments of India have fully supported this initiative for which we are grateful."

Kashag's statement also touched on other aspects of the Tibet issue in the statement, including the deteriorated human rights situationin Tibet, the spate of self-immolations and the continued growing support from governments around the world.

The statement says "Today is also observed as the Human Rights Day, and this year the world is celebrating the 70th anniversary of the Universal Declaration of Human Rights (UDHR). Article 1 of the UDHR declares, “All human beings are born free and equal in dignity and rights.” However, the fundamental principles enshrined in this milestone document in international human rights are trampled upon in Tibet under the occupation of Chinese Communist Party (CCP) regime."

The President's statement has again savaged China's repressive policies inside Tibet, saying "Tibetans in Tibet are subjected to arbitrary detention, imprisonment, torture, and forced disappearances. Various international sources have reported on the CCP’S curtailment of the freedoms of speech, religion, association, assembly and movement. The People’s Republic of China (PRC) continues to violate the UDHR that the world honours in Tibet with impunity."

Dr Sangay has strongly criticised the Chinese government for blocking Tibetans from traveling outside the country by refusing to reissue passports confiscated from Tibetan family members. "The CCP has strengthened restrictions on Tibetans wishing to travel for pilgrimage or to visit family members. It has not only resorted to rescinding travel permits, and revoking passports but also made it extremely difficult to obtain the required documentation."

"Recently, the so-called Tibet Autonomous Region’s (TAR) Public Security Bureau issued a circular called “Reporting Leads on Crimes and Violation by Underworld Forces.” The circular lists 22 activities deemed illegal by the PRC, such as the protection of native language, the environment and dissemination of information on the CTA’s Middle Way Approach. Tibetans are required to report to Chinese authorities if these “illegal” activities are being carried out by other Tibetans,' the statement said, adding: "The circular is now also being implemented in Tibetan prefectures outside of the so-called TAR."

The statement says, "China’s booming mining industry is also damaging Tibet’s fragile ecology and threatening Tibetans’ traditional way of life. The excessive mining and dam constructions have increased landslides and flooding in various regions like the Drichu River in Jomda and Palyul in Chamdo. Thousands of local Tibetans have had to face evacuation."

President also praised the UN Human Rights Council's recent moves toward Tibet, he said: "During these difficult times, it is encouraging to see that there are several powerful countries that support the just and moral cause of the Tibetan people. At China’s third Cycle of Universal Period Review at the UN Human Rights Council, a total of 13 Member States questioned China on the worsening human rights situation in Tibet, in particular, the freedom of religion, freedom of expression, freedom of assembly and the arbitrary imprisonment of Tibetan language advocate Tashi Wangchuk. The multilateral approach at the UN is a powerful mechanism to hold China accountable and defend the rule of law."

President Dr Sangay reiterates his deep gratitude and appreciation for the bipartisan support extended to Taiwan by lawmakers in the United States Senate Committee on Foreign Relations, who recently passed the Reciprocal Access to Tibet Act. "On a national level, in September 2018, the US Congress took a brave and unprecedented move by passing the Reciprocal Access to Tibet Act—a bipartisan bill which will impose a visa ban on Chinese officials who deny Americans entry to Tibet. The US Senate Foreign Relations Committee unanimously approved the introduction of the Act. We trust that the US Senate will follow suit in putting an end to China’s unfair practices and abuse of diplomatic relations."

He expressed his gratitude to the governments, leaders, parliamentarians, Tibet support groups and freedom-loving people around the world for supporting the just cause of Tibet. "Many principled countries and people have stood by us, and committed themselves to the Tibetan freedom movement for the past 60 years. In order to express our gratitude to Tibet’s global friends, the Kashag dedicated the year 2018 as the “Year of Gratitude.” This past year we have held Thank You events in various countries including India, Germany, Canada, the US, the Netherlands, Australia, and Switzerland. During our 60 years in exile, Tibet has made many friends, but we never forgot our old friends. Thank you for standing by us."

Looking at the statement, President also raises critical issues strongly related with moral principles. "We are seeing an increasingly powerful China on the international stage. However, what is notably missing is China’s moral standing. The moral standing—as recognized by the world—is with the Nobel Laureate His Holiness the Great 14th Dalai Lama of Tibet. Therefore, China should accept His Holiness’ Middle Way Approach under which Tibetans seek a genuine autonomy within the framework of the Chinese Constitution. This is a win-win proposition in resolving the issue of Tibet. Until the Chinese government respects the fundamental rights of the Tibetan people, China will not gain respect from the international community."

On behalf of Tibetans inside and outside Tibet, the Tibetan President urged the people of Tibet to follow the Dalai Lama's guidance and warned China, saying 'it is not too late for China to take the right path to resolve the issue of Tibet'. "Six million Tibetans and millions of non-Tibetans around the world look to His Holiness for guidance in leading a peaceful, happy life. It is not too late for the Chinese government to take the right path as well."