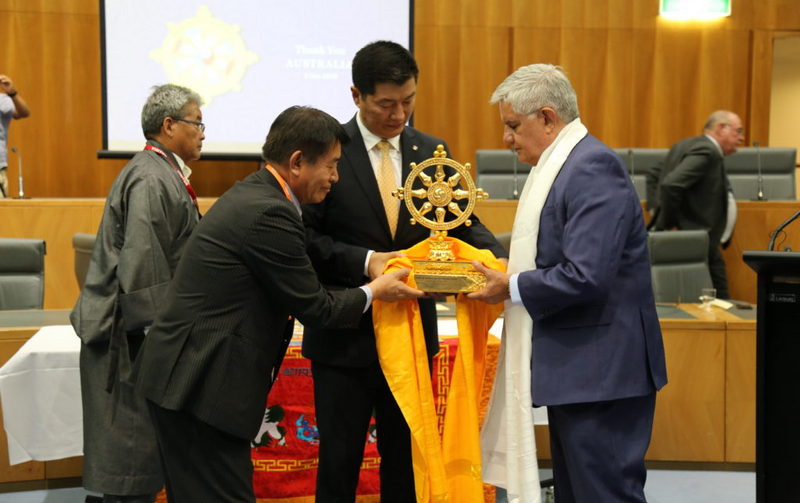 Around 15 members of the Australian Parliament and 50 esteemed dignitaries attended the felicitation ceremony. Presidents of local Tibetan Associations, over a 100 Tibetan dignitaries and members of the Canberra Tibetan community were also present at the special event.

Commending Australia on its trajectory of support rendered towards the Tibetan people and the Tibet cause, such as the discussions on Tibet and around 2200 statements on Tibet made in the Australian Parliament and Australia’s special provision to the former political prisoners to immigrate to Australia, Dr Sangay expressed his gratitude to the people and the government of Australia for their exemplary support and for being host to 2300 Tibetans out of which 1363 are former Tibetan political prisoners and said that Australia “has set a good record to follow.”

Special Guest Honourable Ken Wyatt, Minister for the Indigenous Health, remarked on the similarity in the situation of Tibetans and indigenous people of Australia. He added that this affinity naturally invokes his strong support for the Tibetan people and that he understands the struggle Tibetans continue to face to preserve their Identity and ensured the continuity of his support for the Tibet cause.

Stating the Green Party’s commitment towards freedom, truth and justice and as such support for the Tibet cause, Senator Richard Di Natalie, leader of the Australian Green Party shared that the former leader of the party Bob Brown is an ardent supporter and voice for Tibet in the parliament. He expressed the importance of establishing and improving bilateral relation with China, he added that however, the bilateral relation must not silence the voice in support for Tibet.

In their addresses, other guest parliamentarians and senators expressed their support for Tibet as standing up for the values and principles of truth and justice that they strongly believe in. They also shared that the support for Tibet in Australia is across the political spectrum and throughout the different political parties.

Tibetan parliamentarian Kyizom Dongdue commented on growing China’s influence in Australia that has also led to a surge in discussion on China. Given the history of Tibet and the Tibetan people, she expressed that Tibetans have in experience better understanding and knowledge of China. She expressed her gratitude to Australia and its people for the help and support that has been rendered to the Tibetan people.

At the event, Dr Sangay presented the Thank You Australia memento to Minister Ken Wyatt. Representative Lhakpa Tshoko gave the vote of thanks and cultural performances were also performed by the members of the Australian Tibetan community.