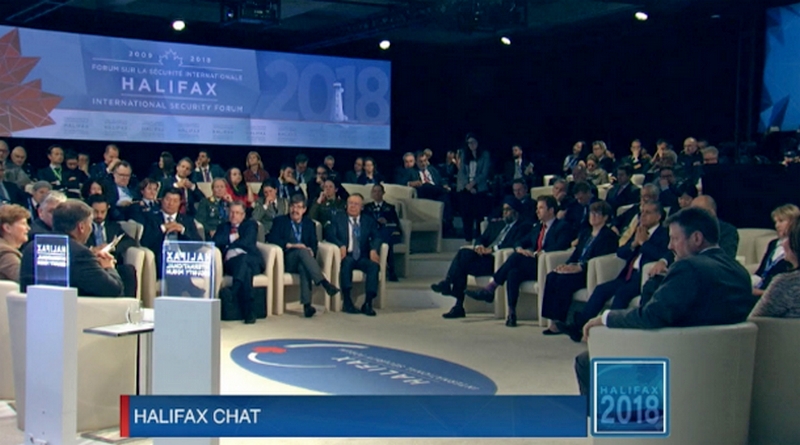 President Sangay along with participants at the 2018 Halifax International Security Forum, on November 18, 2018. Photo: Sikyong Office

This is the tenth time that Halifax has hosted the NATO-sponsored forum, which this year attracted about 300 delegates including Tibetan President Dr Lobsang Sangay, Canadian Defense Minister Harjit Sajjan, eight American senators and top military brass from 70 countries.

Widely acknowledged as a leading gathering, the annual 3-day forum convenes some of the world’s most influential leaders to address the most pressing global security challenges and strengthen strategic cooperation among democracies.

This year’s theme focused on China and Russia’s challenge to the liberal democratic values underpinning the international order.

While more than 90 countries are represented at the forum, it is limited to only 300 participants. US Chairman of the Joint Chiefs of Staff General Joseph F. Dunford, Jr.; Canada’s Minister of National Defence Hon. Harjit Singh Sajjan; and the Deputy Secretary General of NATO Rose Goettemoller were among the big names present.

According to the Sikyong Office, President Dr Sangay spoke at a Dinner Session along with General Micael Bydén, Supreme Commander of the Swedish Armed Forces; and Cindy McCain, Chair of the McCain Institute for International Leadership.

President Dr Sangay talked about democracy under stress due to increasing Chinese influence around the world, including the co-opting of ruling elites.

The Tibetan President also raised some critical issues during the plenary sessions. At the first plenary session, which discussed the importance of the NATO Alliance in protecting the liberal democratic order of the world, he pointed out that China has built a 16+plus alliance in Central and Eastern Europe which does not speak for democracy or human rights.

From the four panelists, Hon. Harjit Sajjan responded that Canada as a nation is committed to defending human rights.

“The claim seems to be that NATO is for democracy and human rights but the NATO alliance is divided. And there is a new narrative being developed, which many countries are buying, and that is that China is a leader in clean energy, climate change, technology, and globalisation,” said President Dr Sangay at another plenary session.

Pointing to Pew Research Center’s survey which shows that 70% of the people in 25 countries believe that China is doing more in world affairs than the US or Germany, President Sangay asked, “How do you counter the narrative? How do you first unite the NATO Alliance and make it speak for democratic values and human rights?”

China’s Belt and Road Initiative (BRI) is designed to change the rules-based International order the United States, with a lot of alliance, has created, said US Senator Mike Rounds. “If you take a look at where they are moving their control and where they are emphasizing [the BRI], it is in the busiest trade lanes in the Indo-China Pacific.”

US Senator Jeanne Shaheen said, “We need to understand the long term implications of China being involved [in world affairs] versus the United States.”

On the sidelines of the Forum, President Sangay met with various US senators and Members of Congress and sought their support for the bipartisan Reciprocal Access to Tibet Act. The Act was passed by the House of Representatives this past September, and is now pending in the Senate.