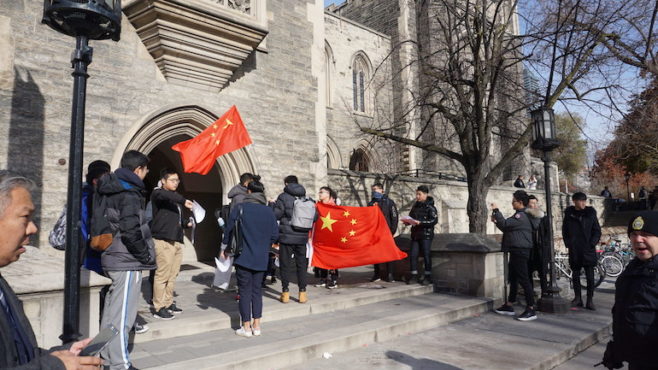 Chinese students protesting against a visit by Tibetan President Dr Lobsang Sangay, at the entrance of the Hart House, University of Toronto, Canada, on November 19, 2018. Photo: Sikyong Office

Toronto, Canada — Picketing at the entrance of the Hart House, a group of Chinese students held a protest against a visit to the University of Toronto by Dr Lobsang Sangay, the President of the Central Tibetan Administration known as the Tibetan Government-in-Exile.

About 10 Chinese, including students from the University of Toronto, gathered at the entrance of the Hart House of the University, on November 19, 2018. But Tibetan students held a traditional welcome for their President at the University.

These types of events were reportedly consulted by Chinese embassies because of many Chinese students abroad paid by, their Communist government to increase their patriotism and devotion to the party. Except it wasn’t entirely spontaneous. Chinese Embassies in many countries reportedly paid students to attend and helped organise the different political events to spread state-produced propaganda around the world.

But unlike Chinese communist leadership, the Tibetan President has welcomed the Chinese protesters, saying we are "celebrating freedom of speech"- exercising principles of freedom they cannot freely hold in their own country like the one outside today.

“That’s a beautiful lake. I never got to see it before,” the Central Tibetan Administration’s President Dr Sangay tells his entourage as they drive by Toronto’s urban waterfront towards University of Toronto’s Hart House where he is scheduled to give a talk.

One of the organizers gets a phone call from the university campus cautioning that there are Chinese students holding a demonstration. Instantly, there is a panic in the car. The organizers are trying to figure out how to handle the situation, according to the Office of Sikyong.

“Don’t worry, I’m used to it,” says President Dr Sangay. The lion is as calm as the lake they are passing by.

At the Hart House, Dr Lobsang Sangay tells the audience the event is “a celebration of freedom of speech.” He explains that people inside in room have the right to speak their minds and the Chinese students outside are entitled to the same right.

“Although those of us inside have the advantage of being in a warm, cozy room, rather than having to stand outside in the cold, gusty wind,” he jokes.

“In China, they cannot freely hold protests like the one outside. If they do it in China, many of them will be arrested and go to jail. So we are celebrating freedom of speech today.”

In the last 60 years, he explained, the Party Secretary of the Tibet Autonomous Region (TAR) has never been a Tibetan. It has always been a Chinese and a Han Chinese.

China’s White Paper says, “Tibetans are masters of their region.” However, Tibetans in the so-called TAR face systemic discrimination under the Chinese Communist Party’s rule.

Whether it’s the regional, prefecture, or county level, a Tibetan who is equally or more qualified than a Chinese is never given a high-ranking government position, explained President Sangay.

“If we were to hold an election in Tibet tomorrow, I’m sure I would win,” declared President Sangay. “Not because I am Lobsang Sangay, but because I am a Tibetan.”

Another Chinese student said he went to Tibet and what he saw was, “They have Tibetan classes. Every morning they sing Tibetan traditional songs. So how you do explain that?”

In 2016, when the Chinese Ministry of Education reportedly issued a directive ordering schools to instil greater patriotism and love for the Communisty party in students of every age — including Chinese students studying abroad.

Since 2007, China’s People’s Liberation Army has sponsored more than 2,500 military scientists and engineers to study abroad, according to a report by SPI think tank published on October 30. The report estimates …approximately 500 Chinese military scientists were sent to each of the UK and the US, roughly 300 students each to Australia and Canada and more than 100 each to Germany and Singapore.

Australian universities conduct world-leading research in areas such as artificial intelligence, super computing and driverless car technology, recently accused of sharing military technology with China that could be adapted for the regime's military purposes.

Because criticism anywhere is a threat, especially criticism that can echo from outside within China. The Communist Party wants to silence descent and criticism. In order to stay in power, the Chinese regime needs complete content from its own population.