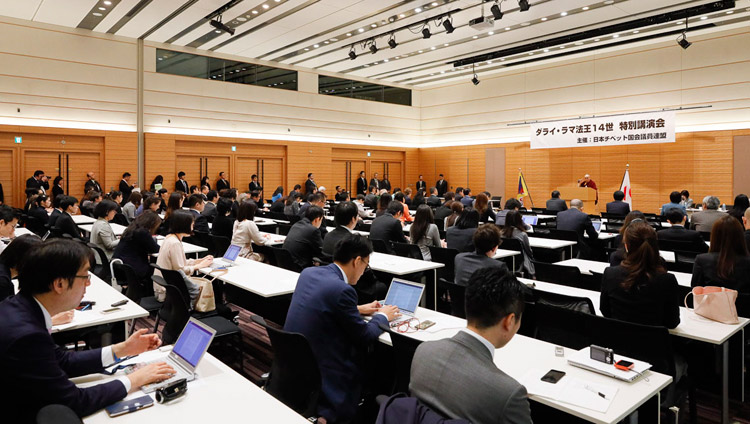 His Holiness the Dalai Lama addressing the All Party Japanese Parliamentary Group for Tibet at the Japanese parliamentary complex in Tokyo, Japan on November 20, 2018. Photo by Tenzin Jigme

“I’m here for just a short visit,” he told them, “and I’m very happy to have this opportunity to meet with members of parliament. Relations between Tibet and Japan date back to the time of the 13th Dalai Lama, but they lapsed after the Second World War. Nevertheless, Japan is an important Asian nation, one with whom we also have strong religious connections.”

The MPs told His Holiness they would like to inform him of their plans, discussions they have held and a resolution they have reached. They were keen to contribute to the preservation of Tibetan culture, language and religious traditions which are part of the Tibetan identity and which are being suppressed by the Chinese in Tibet.

They also expressed interest in supporting economic and educational development inside Tibet. They stated that they have appealed for the release of Tibetan prisoners of conscience, many of whom have been punished for defending their identity and culture. The MPs consider that all nations across the world have a responsibility to defend and support the rights of Tibetans.

His Holiness responded, “Japan is a highly developed country with a strong sense of democracy and freedom. Under the circumstances I would like to thank you for your support of the Tibetan cause. You may remember that some time ago I proposed recognising Tibet as a Zone of Peace. Historically in the 7th, 8th and 9th centuries, according to Chinese documents, Tibet, Mongolia and China were independent nations."

"However, the past is past. We need to take account of the reality today. We are not seeking separate status for Tibet. We are prepared to remain with the People’s Republic of China (PRC), provided there is mutual benefit. I have great admiration for the spirit of the European Union that puts the common interest ahead of the interests of individual members” he added.

Following this friendly interchange, His Holiness was invited to participate in a more formal meeting with the All Party Japanese Parliamentary Group for Tibet (APJPGT). The Chairperson, Hakubun Shimomura, a Member of the House of Representatives from the ruling Liberal Democratic Party spoke first. He said, “The world looks up to you Your Holiness for leadership; you are someone we deeply admire."

"Your advice is for us like the sunshine dispelling darkness. I’d like you to know that we are also working closely with NGOs who support the cause of Tibet. On behalf of us all, I’d like to thank you for coming to our Parliament," Shimomura added.

Vice-Chairperson of the APJPGT, Shu Watanabe, of the People’s Democratic Party, remarked, “This is the fourth time we have invited His Holiness to Parliament. The institution of Dalai Lama is more than four hundred years old. Although he is the leader of the Tibetan people, His Holiness emphasises the importance of considering the welfare of all 7 billion human beings alive today.

"His Holiness stresses the need for greater compassion. He voices a special appreciation of Japan as a technologically highly developed country that has kept its traditional culture and values intact,” Watanabe added.

General Secretary of the APJPGT, Nobuyuki Baba, of the Japan Innovation Party told His Holiness, “In a digital world where people have access to so much information, we feel it’s most important to share with others the cause of Tibet.”

Kyoko Nakayama of the Party of Hope declared, “The cause of Tibet has been neglected when the whole world should pay attention to it. In the course of 60 years in exile you have faced hardship but have also made great achievements—it’s a great opportunity for us to see you here again.”

Yoshiko Sakurai, Chairperson of the Japan Institute for National Fundamentals added, “I have come to Dharamsala with members of parliament. I am determined to work for the Tibetan cause. We have to help those in need. As a result of discussions with members of parliament we have set up this All Party Japanese Parliamentary Group for Tibet, which is the largest parliamentary group for Tibet anywhere in the world.”

“Here we are in an Asian nation, which is highly developed materially and technologically and whose people still hold to the principles of Buddhism,” His Holiness replied, saying: “I’m honoured to meet you, members of the Japanese Parliament."

"Since I was a child I’ve admired democracy. After taking responsibility for Tibet in 1951 I started a reform committee, but it was not effective. The Chinese authorities, disregarding the fact that if we introduced reforms ourselves they would be suitable for Tibetan needs, did not want anything to stand in the way of their idea of reform,"His Holiness told them.

“In 1954, I went to Peking; in 1956 I went to India. During 1957 and 58 a crisis was brewing in Tibet that boiled over in 1959, leaving us no option but to escape. As soon as reached India we took steps to initiate the democratization of our administration. In 2001, we achieved an elected leadership and I was able to retire," he explained.

"In 2011, when another leader was elected, I confirmed my retirement. Not only did I retire, but I put an end to the custom of Dalai Lamas becoming the temporal as well as spiritual leaders of Tibet," he said while speaking about his decision to hand over political power to an elected leadership.

“I appreciate your resolution about Tibet. Over the last 70 years since they occupied the country Chinese hardliners have tried different methods, the use of force, brainwashing and bribery to diminish the Tibetan spirit. But the greater the suppression, the stronger the Tibetan spirit grows," the Tibetan leader told them that Chinese policies of repression which undermine Tibetan national identity at its roots and Tibetan practices in fundamental ways.

“There were all kinds of problems in Tibet before 1959, but there was no intrinsic conflict between the Tibetan and Chinese peoples. However, Chinese behaviour has created a rift between the two. Discrimination exists in the administration, schools and even in prisons. The Chinese government proclaims harmony and stability, but their policies completely undermine these goals. They need to be more realistic," Tibetan spiritual leader has criticised the Chinese government's policies toward Tibet and its people.

“On our part, since 1974 we have not sought independence. We are prepared to stay with the PRC, provided we have all the rights we are entitled to. A few years ago, we noticed the existence of a thousand or so articles in Chinese supporting our Middle Way Approach (MWA) and critical of Chinese government policy," His Holiness said, adding; "Today, there are at least 300 million Chinese Buddhists, many of them educated people with an appreciation of the value of the Nalanda Tradition."

“I tell parliamentary groups who support Tibet in Europe that the more they are able to express concern from their own side about the situation in Tibet, the more it helps Tibetans and raises their morale. It encourages them to know there is support elsewhere in the world," the spiritual leader of Tibet told the Tibet support group.

"It would be helpful if you were able to go into Tibet on an environmental fact-finding mission, accompanied by ecologists, to see for yourselves how things are. As you know, as the source of great rivers, Tibet’s ecology is crucial to Asian well-being," he said when speaking on environmental issues and abuse of the Tibetan environment by the Chinese.

"In India these days I am encouraging young people in particular to revive interest in ancient Indian knowledge of the workings of the mind and emotions. It may be ancient, but I believe this knowledge remains essentially relevant today," His Holiness told them as he previously suggested inclusion of the ancient Indian knowledge as an academic subject in the existing education system in India.

"Japan is a Buddhist country and I’m convinced that if they took more interest in this inner knowledge people here too could cultivate a firm peace of mind,” the Nobel Peace Laureate said while requesting Japan to revive interest in ancient knowledge of the workings of the mind and emotions.

The resolution of the All Party Japanese Parliamentary Group for Tibet was formally read out in Japanese. Erico Yamatani of the Liberal Democratic Party offered concluding words of thanks. She expressed gratitude to His Holiness for coming to the Parliament. “If we were to heed what His Holiness advises we might be able to achieve peace in the world.

"I also offer the thought that we must do more research into ways to reverse climate change, keeping in mind the important role of the Tibetan Plateau as the Third Pole. Thank you,” Yamatani added.

Before leaving the meeting His Holiness indicated the Japanese and Tibetan flags standing together and told his hosts that when he was in Peking in 1954, Chairman Mao Zedong asked if Tibet had a flag. When he hesitantly told him it did, Mao replied, “Good, you must keep it. You can fly it alongside the Red Flag.” He told the meeting that with those words Chairman Mao gave his approval for the flying of the Tibetan flag, so there should be no room for anyone to complain about it afterwards.