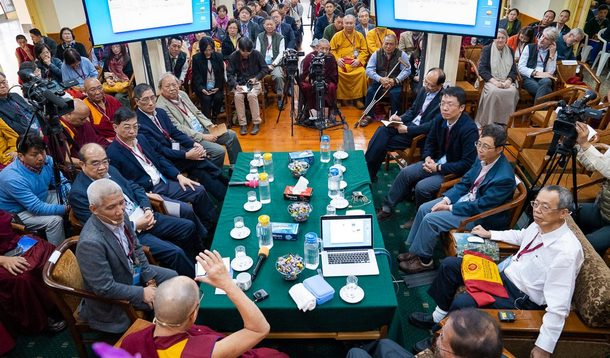 His Holiness delivers his opening remarks on the first day of the dialogue with Chinese scientists about quantum effects in Dharamsala, HP, India on November 1, 2018. Photo by Ven Tenzin Jamphel

Dharamshala, India — Tibet does not seek independence from China but wants genuine autonomy for the Tibetan people, the spiritual leader of Tibet, His Holiness the Dalai Lama said at an interactive session with Chinese scientists about quantum effects, at the Main Tibetan Temple in Dharamsala, HP, India on November 1, 2018.

Noting that 'relations between Chinese and Tibetans are thousands of years old', he conceded that 'they have sometimes quarrelled. At other times, such as in the 7th century, their ruling families have intermarried.'

"Since 1974, it was decided not to seek independence for Tibet, provided Tibetans were granted all the rights they are entitled to under the Chinese constitution, including the preservation of their language and culture, as well as the protection of Tibet’s environment," the Nobel Peace lureate told the gathering in Dharamshala, India.

The first discussions between Chinese, mostly Taiwanese, scientists and His Holiness the Dalai Lama took place at the Main Tibetan Temple where about 270 Tibetans joined the audience: researchers from His Holiness’s office, as well as students from the Men-tsee-khang, the College for Higher Tibetan Studies, Sarah, the Tibetan Children’s Village and neighbouring schools.

His Holiness remarked that 'Tibetans can benefit from Chinese help in terms of material development, while Tibetans can share their knowledge of the Nalanda Tradition with Chinese Buddhists.'