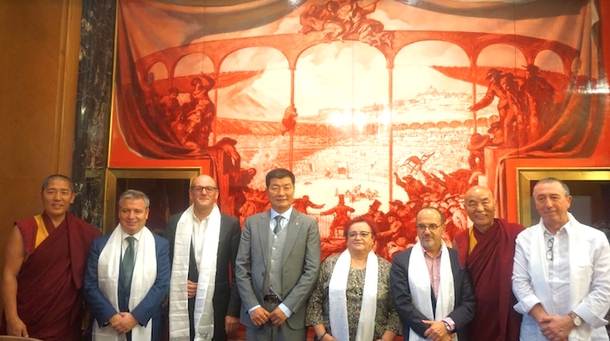 Madrid — President of the Central Tibetan Administration, Dr Lobsang Sangay on his first official visit to Spain's central capital Madrid, arrived amidst warm welcome from Tibetans and friends of Tibet. He was invited by the CEIM, the confederation of businessmen from Madrid to speak and network with the members.

The CEIM briefed President Dr Sangay on their commitment to the promotion of business development for the benefit of the general interest and specifically to contribute to the development and welfare of the Community of Madrid. Environmental protection also features high in their agenda. President Dr Sangay thanked them for the invitation and specifically for their concern on the issue of Tibet.

When asked on ways to support Tibet, President Sangay asked the organisation to work in solidarity in the protection of Tibet’s fragile environment. He further deliberated by pointing out how Tibet is the water tower of Asia and millions of livelihood are dependent on the rivers originating from the plateau.

Later, President Sangay met with the Members of the Spanish Parliament; the Cortes Generales. He thanked the parliamentarians on taking time out to meet him despite their ongoing parliament session.

He said it sends out a very positive message to Tibetans, especially Tibetans in Tibet who will be reassured that there are people who care for peace, justice and human rights. Dr. Sangay then briefed them on the grim situation inside Tibet which he said is akin to the revival of the Cultural Revolution.

On further deliberation, he said, “In the last few years, the human rights situation has become bad to worse. 152 Tibetans have self-immolated in Tibet. Why are Tibetans self-immolating if they are content in Tibet as claimed by the Chinese government? Also, the number of monks and nuns are reduced to 5000 in Larung Gar and 2000 to 3000 in Yachen Gar Buddhist institutes."

"When the monasteries were destroyed, their life was destroyed too. Three nuns have committed suicide as a result of this destruction. The Freedom House report ranked Tibet as the least free only after Syria. Reporters without Borders has similarly reported Tibet being more difficult to access than North Korea,” the Tibetan President added.