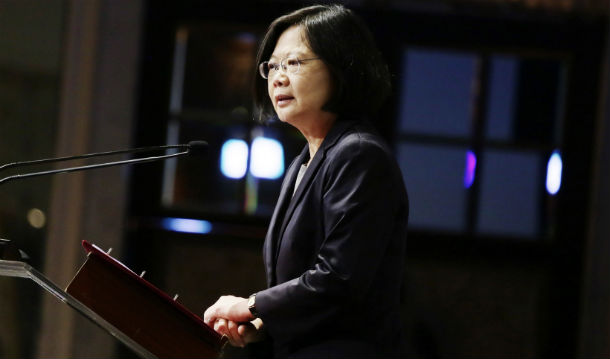 Taipei, Taiwan — President of Taiwan Tsai Ing-wen called on and asked China to be a "responsible" country on the world stage rather than provoking unnecessary conflict, amid worsening relations between Beijing and the country it considers a renegade province.

Tsai made the remarks during a televised speech on 10th October, Taiwan's National Day, which marks the 107th year of the founding of the Republic of China, as the island is officially known.

The Taiwan President said that the island had no intention of recklessly provoking China but also stated that Beijing should also avoid being a "source of conflict."

"Recently, China's verbal attacks, military threats and diplomatic suppression have not only challenged cross-strait relations but also challenged the peace and stability across the strait," she said.

Tsai said she would work to strengthen the island's national security in response to the increasing threats from Beijing, which she said had been exerting growing pressure on the country. In September, the US approved a $330 million arms sale to Taiwan, primarily spare parts for the island's air force.

Tsai's speech echoes strong comments made by US Vice President Mike Pence in the United States on Thursday, in which he accused the Chinese government of being a negative influence on both the US and the rest of the world.

Tsai's party is facing a tough battle at the upcoming local elections in Taiwan in November after the President's popularity dropped following few months of bad economic news and tensions with mainland China.

Relations between Taipei and Beijing have become stagnant since Tsai was elected in 2016, resulting in clashing displays of military power and strained economic ties across the Taiwan Strait.

The Chinese government fears the pro-independence sentiments in Tsai's ruling party, which has historically called for the nation to formally separate itself from mainland China.

Despite Taiwan having been self-governed since the end of the Chinese civil war in 1949, Beijing still views it as a part of its territory and has repeatedly called for its reunification with the mainland, by force if necessary.

In her speech, Tsai said China's increased pressure on Taiwan had been responsible for changing the status quo across the Taiwan Strait, souring bilateral relations.

"As President, I guarantee to my citizens that I will definitely not move to confrontation in a moment of anger and make cross-strait relations fall into danger. But I will also not ... sacrifice Taiwan's sovereignty," she said.

"It's filled with absurd separatist remarks, exposing her evil intentions to contain mainland China by cooperating with anti-China forces in the West," spokesman Ma Xiaoguang stated.

"Such a hostile and provocative speech is further proof that (Tsai's) party is creating cross-strait conflicts and harming peace and stability in the strait. It will only worsen cross-strait relations and push Taiwan toward greater danger."

In his speech the previous week, Pence doubled down on the earlier remarks made by US President Donald Trump, saying Beijing was attempting to meddle in the upcoming US midterm elections.

"To put it bluntly, President Trump's leadership is working. China wants a different American President," Pence said. In response to that, Beijing said that the US’ claims of electoral interference were "baseless."

In his remarks, Pence took a firm stand on the issue of Taiwan, commenting on the ongoing efforts of Beijing to strip the island of its diplomatic allies around the world and forcing multinational companies to remove any references to the island as a separate entity from China.

"Taiwan's embrace of democracy shows a better path for all the Chinese people," he said.