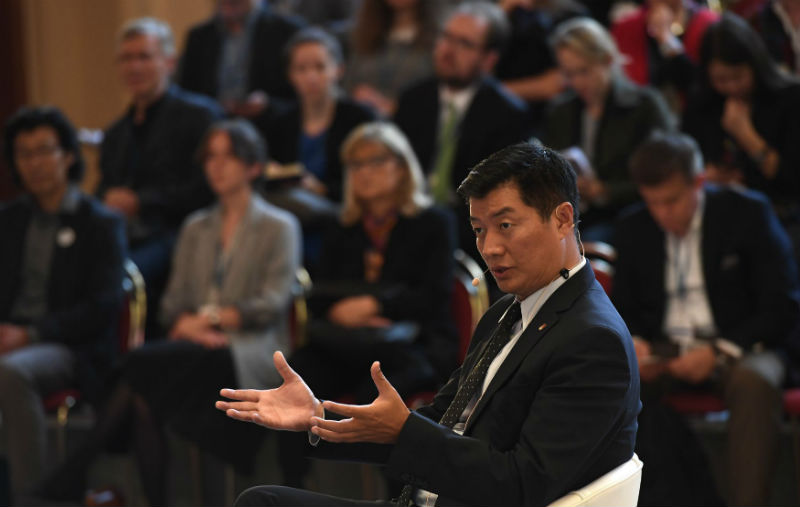 Prague, Czech — 'The newly established group in support of Tibet was evidence of growing public support for Tibet in the Czech Republic,' President Dr Lobsang Sangay told the Radio Prague, while praising the spirit of the Gentle Revolution, also known as the “Velvet Revolution” brought about the bloodless overthrow of the Czechoslovak communist regime.

A “Friends of Tibet” group has just been established by fifty deputies and senators in the Czech Parliament. The news was announced on Tuesday at the Forum 2000 conference in Prague.

The group, established by the Pirate Party along with the Civic and Christian Democrats and TOP09 aims to focus on human rights issues as well as environmental and cyber protection, according to a report by Ruth Fraňková of the Radio Praha, the official international broadcasting station of the Czech Republic.

"The Friends of Tibet group was officially launched on Tuesday, on the occasion of a visit to the Czech Parliament by Lobsang Sangay, head of the Tibetan government-in-exile," the report said, adding: "The establishment of the group was initiated by Pirate Party deputies Dana Balcarová and František Kopřiva along with their Civic Democrat colleague Marek Benda and independent senator Jitka Seitlová."

Mikuláš Peksa, deputy of the Pirate Party and one of the members of the group, explained the news agency that the reasons for its establishment: “We felt strongly that interest in Tibet was declining under the Ministry of Foreign Affairs led by the Social Democrats in recent years. So we felt it was time to highlight the issue and attract some attention to the problem.”

The report further said that "the group plans to organise seminars and exhibitions related to Tibetan issues, receive visits by the Tibetan government-in-exile and react publicly to any news concerning Tibet.

Mikuláš Peksa says the activities will focus mainly on human rights issues as well as environmental and cyber protection. “Tibet is covered by glaciers and the melting of glaciers will release huge amounts of carbon dioxide and methane, which will change the climate on a global scale.

“As you probably know, the website of the Tibetan government was attacked by the Chinese intelligence service. The malware was later also used in attacks on the Pentagon. So cooperation with Tibet could definitely help us to improve Czech cybernetic security.”

Dr Lobsang Sangay, head of the Tibetan government-in-exile, who was one of the guest speakers at this year’s Forum 2000 conference, told Czech Radio that the newly established group in support of Tibet was evidence of growing public support for Tibet in the Czech Republic.

“You constantly hear around the world that China is becoming so powerful and influential that it is difficult to raise the issue of Tibet and seek support for the Tibetan cause.

“But the Czech Republic is showing through the largest parliamentary support group that the spirit of the Velvet Revolution and the message and the vision of Václav Havel are still alive here.

“So it’s a great honour and privilege that so many members of parliament are coming out and forming a group to support Tibet and sending a message to Beijing that human rights and solidarity are alive and for Tibetans inside Tibet that we are with you and we will be with you for a long time.”