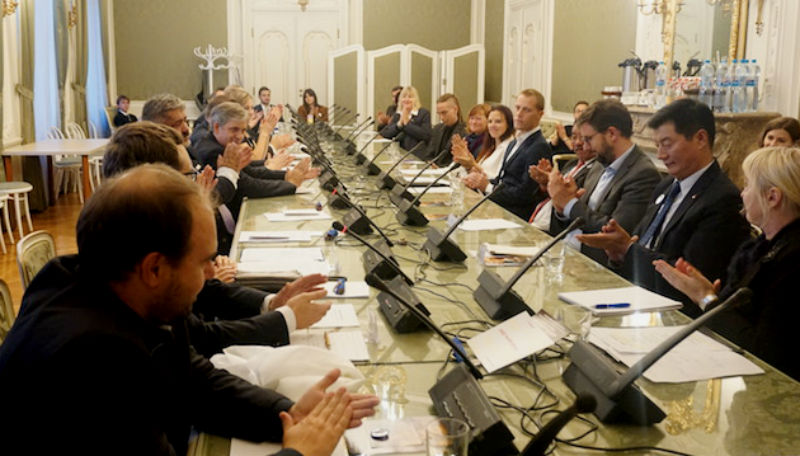 Prague, Czech — Describing "Socialism with Chinese characteristics as the new mantra of Chinese President Xi Jinping to the world," President Dr Lobsang Sangay Wednesday warned the free world that China could either transform you or you can transform China.

The President's remarks came during a meeting with Czech Parliamentary Group for Tibet at the Senate of the Parliament of the Czech Republic, Valdštejnská, where he highlighted to the group, the ongoing political repression, cultural assimilation, economic disparity, environmental destruction and social discrimination inside Tibet.

The Czech Parliamentary Group for Tibet, established in September this year, officially launched its activities with the initiative of MP Dana Balcarová (Pirate Party) and Marek Benda (ODS) yesterday at the Senate of the Parliament of the Czech Republic.

According to Tenzin Dechen, Communication Officer, Sikyong’s Office, President Dr Sangay spoke at the launch event. The launch was made to coincide with the occasion of the Forum 2000 conference at which President Sangay was also scheduled to speak.

The Czech Parliamentary Group for Tibet aims to point out possible solutions to the Tibetan issue and serve as a reminder that silencing the dialogue often proves counterproductive.

The Group with over fifty representatives from both Chambers—Chamber of Deputies and the Senate—is the largest group of friends within the Parliament and also the largest Parliamentary Group for Tibet in all of Europe.

At the launch event, the Group expressed high hopes for President Sangay and support for genuine autonomy for the Tibetan people. They urged the Tibetans to fight for their autonomy and culture and said it will be worth it by citing their own country’s example.

President Sangay thanked the MEPs and the Senators for establishing the Parliamentary Group for Tibet and said that the creation of this group sends a message of hope to all Tibetans, especially Tibetans inside Tibet. He expressed his gratitude to the Czech Parliamentarians for expressing heartfelt concern over the grim human rights situation in Tibet, and for urging the Chinese government to solve the issue of Tibet peacefully through engaging in dialogue with the envoys of His Holiness the Fourteenth Dalai Lama.

As this year marks 60 years of China’s repressive rule over Tibet, President Dr Sangay highlighted to the group, the ongoing political repression, cultural assimilation, economic disparity, environmental destruction and social discrimination inside Tibet. He referred to the 2016/17 Freedom House Report which ranked Tibet as the least free after Syria and also Reporters Without Borders listed Tibet as being more difficult to access than North Korea.

“Such attempts,” President Sangay said, “is indicative and itself speaks of the severe repression inside Tibet. President Sangay explained that the Middle Way Approach, as envisioned by His Holiness the Dalai Lama and proposed by the Tibetans, seeks genuine autonomy for Tibetans within the framework of the Chinese constitution.”

“The approach based on dialogue and non-violence is reasonable, moderate and in no way challenges the sovereignty and territorial integrity of China. However, instead of responding to this proposal positively, the Chinese government has resorted to misinterpretation, misinformation, ultimately resulting in misunderstandings.” He further added that “supporting Tibet is supporting non-violence, dialogue, freedom, human rights and democracy.”

President Dr Lobsang Sangay also participated in a Festival of Democracy panel discussion which is an associated program of the Forum 2000 Conference. The panel was co-hosted by Martin Bursik, Czechs Support Tibet. President Sangay on the panel’s discussion topic, “Will the democratic world pass the Tibetan test? remarked that, on the one hand, Europe is for democracy, solidarity, human rights, non-violence and peace, yet Tibet gets sidelined.

“Tibetans have till date pursued the path of non-violence and employs dialogue to resolve the issue of Tibet peacefully with their Chinese counterpart. It is, therefore, the test of the European countries whether they are for democracy, non-violence, peace and human rights. If they are, they should stand for Tibet because you can’t say I am for democracy but not for Tibet. So Tibet is a test of your philosophy, your constitution and a test of your conscience. European countries should not forget their history. We believed in your revolutions, we subscribed to it and we are still in it. It is time for European countries to lead,” said Dr Sangay.

President Sangay later gave an interview to Czech National Television, the largest television network in the Czech Republic and also had a brief interaction with the media. Dr Sangay also met Tibet Support Group members and thanked them for their longtime support for the cause of Tibet.