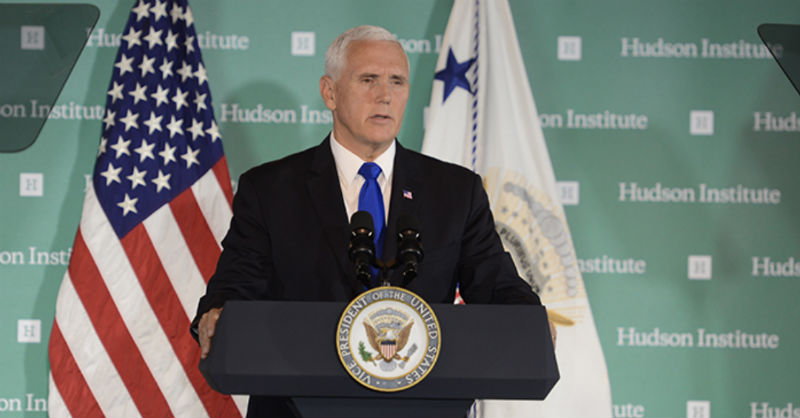 Washington, DC — 'America had hoped that economic liberalisation would bring China into greater partnership with us and with the world. Instead, China has chosen economic, political and military aggression. In recent years, it has taken a sharp U-turn toward control and oppression,' US Vice President Mike Pence said, criticising the Beijing’s homeland and foreign policy at Hudson Institute.

US President Pence also bravely and strongly raised the current ongoing repressive policies in occupied Tibet, saying "Beijing is also cracking down on Buddhism. Over the past decade, more than 150 Tibetan Buddhist monks have lit themselves on fire to protest China’s repression of their beliefs and culture.”

In his remarks on 4 October, Pence pointed fingers at Beijing’s malign influence and interference in American democracy, businesses, academic institutions and media organizations. “Beijing is also cracking down on Buddhism. Over the past decade, more than 150 Tibetan Buddhist monks have lit themselves on fire to protest China’s repression of their beliefs and culture.”

“China has initiated an unprecedented effort to influence American public opinion, the 2018 elections, and the environment leading into the 2020 presidential election,” Pence said at the Hudson Institute, a Washington think tank.

“To put it bluntly, President Trump’s leadership is working, and China wants a different American president. China is meddling in America’s democracy.” President Donald Trump had also charged the Chinese government with meddling in the U.S. election in the previous week during a United Nations Security Council session.

“To that end, Beijing has mobilized covert actors, front groups and propaganda outlets to shift Americans’ perception of Chinese policies. As a senior career member of our intelligence community recently told me, what the Russians are doing pales in comparison to what China is doing across this country.”

As a sharp critique of Beijing’s policy towards religious freedom in its own homeland, Pence said, “Beijing is also cracking down on Buddhism. Over the past decade, more than 150 Tibetan Buddhist monks have lit themselves on fire to protest China’s repression of their beliefs and culture.”

“A new wave of persecution is crashing down on Chinese Christians, Buddhists, and Muslims…Last month, Beijing shut down one of China’s largest underground churches. Across the country, authorities are tearing down crosses, burning Bibles, and imprisoning believers. And Beijing has now reached a deal with the Vatican that gives the avowedly atheist Communist Party a direct role in appointing Catholic bishops. For China’s Christians, these are desperate times.”

“In Xinjiang, the Communist Party has imprisoned as many as one million Muslim Uyghurs in government camps where they endure around-the-clock brainwashing. Survivors of the camps have described their experiences as a deliberate attempt by Beijing to strangle Uyghur culture and stamp out the Muslim faith.”

“Today, China has built an unparalleled surveillance state, and it’s growing more expansive and intrusive – often with the help of U.S. technology. The “Great Firewall of China” likewise grows higher, drastically restricting the free flow of information to the Chinese people. And by 2020, China’s rulers aim to implement an Orwellian system premised on controlling virtually every facet of human life – the so-called “social credit score.”

“In the words of that program’s official blueprint, it will “allow the trustworthy to roam everywhere under heaven while making it hard for the discredited to take a single step."

Pence also accused CCP of using rewards and coercion as incentives to influence American businesses, universities, and think tanks, and government officials. He stated incidents and examples such as that China threatened to deny a business license for a major American corporation unless it spoke out against the Trump administration’s trade policies.

“Beijing compelled Delta Airlines to publicly apologize for not calling Taiwan a ‘province of China’ on its website. It also pressured Marriott to fire a U.S. employee who liked a tweet about Tibet,” the vice president said.

Pence implicitly warned that a new consensus is rising against Beijing.

“More journalists are reporting the truth without fear or favour and digging deep to find where China is interfering in our society, and why – and we hope that more American, and global, news organisations will join in this effort.

“More scholars are speaking out forcefully and defending academic freedom, and more universities and think tanks are mustering the courage to turn away Beijing’s easy money, recognizing that every dollar comes with a corresponding demand. We’re confident that more will join their ranks,” the Vice President added.

Pence urged that Google should immediately end development of the “Dragonfly” app that will strengthen Communist Party censorship and compromise the privacy of Chinese customers.

He further accused China of “reckless harassment” of the U.S. Navy during operations in the South China Sea. And noted that China has used “debt diplomacy” to expand its influence in Africa and elsewhere, offering billions of dollars in infrastructure loans aimed at benefiting China’s access to ports and other key transit hubs.