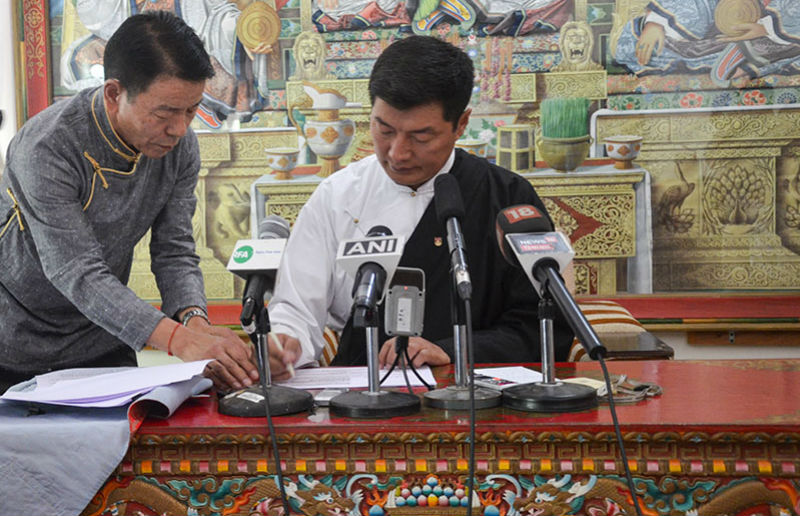 Dharamshala, India — President of the Central Tibetan Administration Dr Lobsang Sangay Wednesday signed the recent Tibetan electoral amendments into law to reinforce the party less democratic system of the Tibetan people and to regulate campaign and election practices and their timeframe.

“Tibetan democracy is a partyless democracy. We believe in it and we take pride in it. Now with these amendments, we have achieved true party less democracy,” President Dr Sangay addressed the audience through the press at the signing ceremony held at Kashag Secretariat, on October 3, 2018. The event was covered by various journalists.

The new law prohibits all regional and religious associations and NGOs from nominating candidates for Sikyong and Members of the Parliament. “In the recent election, some regional organisations have acted like de facto political parties and have nominated candidates. These actions have led to some regional issues within the community,” he explained, citing past challenges in the election.

As told by the President, regional or religious organisations or any NGOs are banned from nominating political candidates on the following grounds. “One, regional or other NGOs are registered with Indian Society Registration Act. As per this Act, these organisations are not allowed to engage in electoral politics. Their registered societies bylaws are for specific issues such as social welfare, health or spiritual related.”

He further continued to say that the amendments empower future candidates to run for election individually and contest fairly and hassle-free. He described the Tibetan Administration system as essentially a culture, community and consensus-based system.

“As Buddhist follower, particularly of Vinaya tradition, Tibetan cabinet emphasises and functions in a collective, consensus-based system. We believe in culture, community and consensus-based system hence Individual interest is secondary to the interest of Tibetan Administration and Tibetan cause. The Tibetan Buddhist based democracy is our contribution to the whole world,” said CTA president.

The second major amendment is regarding the Process of Electing Sikyong in the Preliminary and Final Election. According to the new law, ‘If in the preliminary election, a candidate secures more than 60% of the total votes, then, he or she doesn’t have to contest the second round and is automatically, elected.’

Dr Sangay said the purpose is to lessen party politics in the community. The third amendment established a new and reduced timeframe for the election process. From more than 200 days, it has been cut to less than a hundred days. “It is still long but nonetheless we have shortened it by more than half,” the President said.

He emphasized the contribution of the Tibetan form of Buddhism towards the framework of Democracy through the passing of these recent bills. The next Tibetan election will take place in 2021.