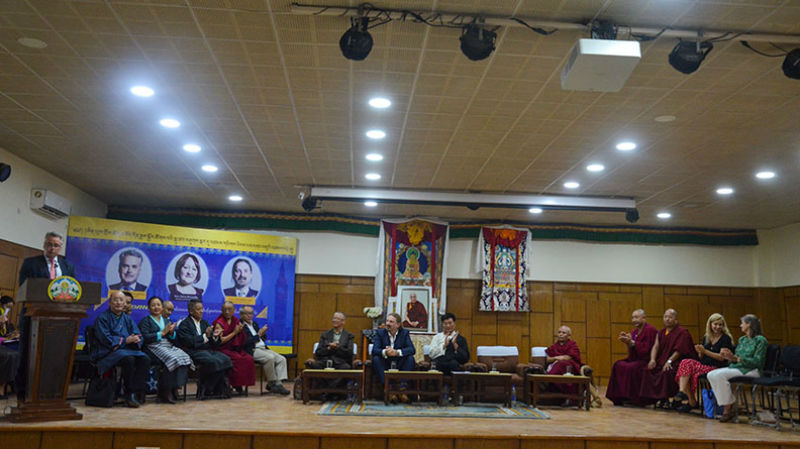 Kashag (Cabinet) hosted a banquet in honour to welcome them following which the members visited various offices of CTA and NGOs and met with respective officials and dignitaries of CTA.

The highlight of their visit was gaining an audience with His Holiness the Dalai Lama on 28 September where they had a long interactive session with His Holiness on wide-ranging topics but mainly concerning Tibet’s issue.

On the same day, later in the evening, the members had an interactive talk session with CTA Officials, staffs and Tibetan NGOs organised by CTA. Honourable UK parliamentarian Kerry McCarthy could not make it to the gathering due to a busy schedule.

The President of the Central Tibetan Administration, Dr Lobsang Sangay once again extended his welcome to the parliamentarians and gave them a brief introduction of all the present Kalons, officials and dignitaries of CTA.

Expressing his gratitude towards the United Kingdom for their enormous support and the time rendered by the parliamentarians to make the effort to come all the way to visit them, President Dr Lobsang Sangay stated that this sends a powerful message and a good, right message for the Tibetans inside Tibet. It shows them that despite China’s powerful influence, there are many more people outside Tibet who are fighting for the cause of Tibet. “They are for the pro-justice, pro-freedom and pro-human rights in Tibet,” said the President. These supporters represent pro-justice more than pro-Tibet.

He further went ahead to quote His Holiness the Dalai Lama and said, “Injustice anywhere is injustice everywhere.”

President further remarked that the Chinese Communist Party is driven by Xi Jin Ping’s ideology which leaves no room for freedom of speech and democracy and now they intend to bring the same ideology to the world which is the biggest threat.

Besides restoring justice, basic liberty and freedom inside Tibet, the President explained the Parliamentarians about the other purpose of the CTA which is to challenge the Chinese narratives of Tibet under the guidance and vision of His Holiness the Dalai Lama.

He referred to the CTA as the engine of the Tibetan struggle and talked about the bills passed in the recently concluded session of the parliament. He declared that Tibet is now officially a Non-Party Democracy and that this decision of the parliament will help the members of the government to serve Tibet without any vested interests.

Parliamentarian Timothy Loughton addressed the gathering and conveyed that the UK Parliament is divided by many factors when attempting to address a discourse but the one and probably the only thing that unites them is their solidarity with Tibet and the Tibetans, and their willingness to fight for the cause of Tibet.

Being an advocate and preacher of Tibetan form of meditation, he understood the power resilience and non-violent struggles.

He recalled a conversation he had with His Holiness asking him why China fears Tibet even though China is both, a strong economy and a military power while Tibet lacks those? His Holiness answered that Tibet is sustained by huge resilience and belief unbeatable to China.

MP Timothy commented that despite innumerable efforts that China makes, it can never counterfeit Tibet’s strength and resilience through its power of money and force.

He further emphasised the significance of Tibet’s struggle because of the massive impact it has on the world in terms of climate change.

“China is indeed a powerful nation. Howsoever, you deal with them the way you deal with bullies by standing up to them” advised MP Timothy. MP Timothy once again expressed his solidarity with Tibet and Tibetans and was optimistic about the day when he and his co-parliamentarians would be delivering the same speech at Lhasa in Tibet.

Christopher Law, MP from the Scottish National Party, in his speech, praised the resilience of the Tibetan people unlike the superficial prowess of China. He drew a similarity between Tibet and his motherland Scotland, historically and culturally, so as to reaffirm his support for Tibet and assuring his continuous struggle for Tibet’s cause.

“My message for China is that there is nothing to fear for Tibetan people being Tibetan themselves who are identifying themselves through a democratic process with their own Parliament reflecting their own views.”

He was hopeful for the day when His Holiness would return to Tibet and further claimed that His Holiness the Dalai Lama is widely loved and respected all over the world and even his seven-year-old niece recognises his importance.

MP Chris assured for a possible debate on the recently passed legislation bill by the US on his return to the parliament in the UK.

Thereafter, concluding the session, Deputy Speaker Ven. Acharya Yeshi Phuntsok thanked the respective parliamentarian delegation from the UK for their incessant support to the cause of Tibet.

Marking the day as a historic moment, Deputy Speaker reminded the audience about the historical ties between Tibet and Britain dating back to various engagements meted out in the past, particularly the Shimla Agreement in 1914.

Whether through political or historical ties, Deputy Speaker was hopeful that the coming 7th World Parliament Convention to be held in November would see more of participants supporting Tibet and the Tibetan people.