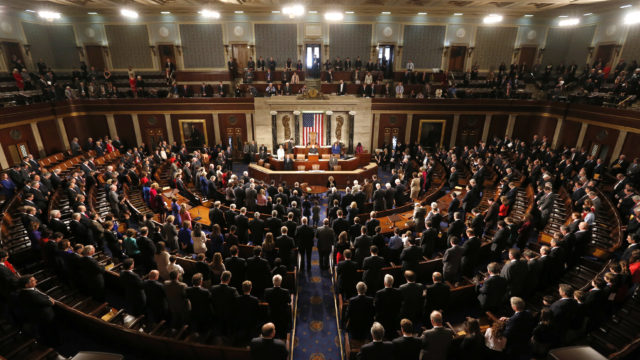 The US House of Representatives. Photo: File

The US has expressed concern in the past about the lack of access to Tibet for US journalists, diplomats, academics and others to report on religious persecution in the occupied region of Tibet.

US Congressman Jim McGovern, Democrat from Massachusetts, Co-Chair of the bipartisan Tom Lantos Human Rights Commission and the main author of the Reciprocal Access to Tibet Act, on Tuesday welcomed the passing of the bill in the House of Representatives.

“Today is a great day for human rights… America’s foreign policy ought to send the message that we value human rights. That we stand with those working for freedom. That those values compel us to speak out when we see something that’s wrong. And that we will hold accountable those who violate the basic human rights we are all entitled to. And that’s exactly what this bill today is all about,” he said on the House Floor.

Rep Jim McGovern (D-Mass) introduced the bill in the house alongside Rep Randy Hultgren (R-Ill.). Under the ‘Reciprocal Access to Tibet Act’, the Chinese officials who deny Americans entry to Tibet will be denied entry to the US.

One of the strongest voices and an eternal champion for the cause of Tibet, Congressman McGovern first introduced the H.R. 1872, the Reciprocal Access to Tibet Act in 2014. In April 2017, on the eve of the first summit between President Donald Trump and Chinese President Xi Jinping, the bill was introduced in both House and Senate of the US Congress by Senators Marco Rubio (R-FL) and Tammy Baldwin (D-WI) and Representatives Jim McGovern (D-MA) and Randy Hultgren (R-IL).

Under this bill, Chinese authorities who are involved in the design and implementation of policies that restrict travel to Tibetan areas become ineligible to receive a visa or be admitted to the United States.

Arguing that the basis of diplomatic law is mutual access and reciprocity, Representative McGovern said that while Chinese diplomats and journalists travel freely in the US, the Government of China has erected many barriers in areas of China inhabited by ethnic Tibetans.

He said the Act “will impose real consequences for China’s bad behavior in Tibet.”

“With this bill, we are taking an important step forward on behalf of the human rights of Tibetans, we are reaffirming our support for the leadership of His Holiness the Dalai Lama, and we are sending a message to the government of China: human rights are not negotiable. Supporting human rights is the moral thing to do. It is the right thing to do. And it is the American thing to do — for Tibetans, in China and everywhere else in the world.”

Rep McGovern further raised concerns over the many negative consequences faced by Tibetans in China and for citizens of the United States as a result of the existing restrictions to Tibet.

“Tibetans are left isolated from the rest of the world. Their well-documented suffering under Chinese rule — arbitrary detention, torture and ill-treatment, extensive government surveillance, restrictions on the use of their language and their religious and cultural practices — all these violations of fundamental human rights are hidden from sight.”

He added that preventing diplomats, journalists, and tourists from travelling to Tibet makes it much harder to assess the full scope of these abuses.

Recollecting the US Congressional visit to Tibet in November 2015, McGovern said he knew first-hand how important access to Tibet was, “because I had the opportunity to join Leader Pelosi and several other Members of Congress for a visit there in November of 2015.”

“I saw the tight control the government exercises over virtually all aspects of the daily lives of Tibetans. And I had people thank me for being there, remembering them, and fighting for their rights.” The delegation was the first congressional delegation to enter Tibet since 2008 uprising.

The Reciprocal Access to Tibet Act includes a national security waiver and would require the US Secretary of State to submit to Congress an assessment of the level of access to Tibet granted to American government officials, journalists, and tourists by Chinese officials.

The bill states that if the Secretary determines there are restrictions on travel to Tibet, the appropriate Chinese officials will be ineligible to enter the US.