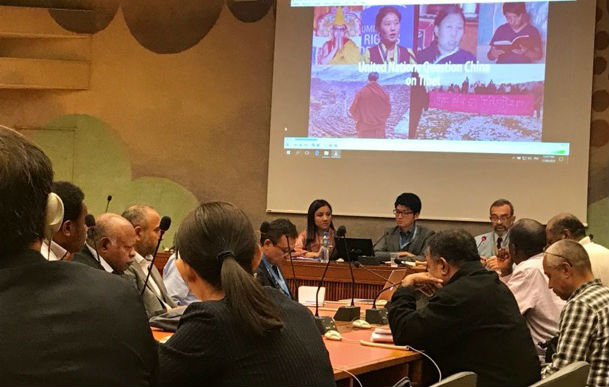 Speaker and moderator of the side event with the new and outgoing CTA’s UN advocacy officers. Photo/OOT Geneva

Geneva, Switzerland — At the 39th session of the United Nations Human Rights Council (UNHRC) on 17th September 2018, the human rights situation of Tibet in China was also a major topic of discussion.

The Society for Threatened Peoples organized a side event titled “Human Rights in China-Seeking Solutions: The Case of Tibet Autonomous Region and the areas where Tibetan live”. The organisation aims at protecting threatened minority groups under oppressive regimes.

Dhardon Sharling, Secretary for Information, Department of Information and International Relations and Taisuke Komatsu from International Movement Against All Forms of Discrimination and Racism (IMADR) were the two most prominent speakers of the assembly. Adrien-Claude Zoller, President of Geneva for Human Rights, moderated the session, according to the Office of Tibet, Geneva.

Secretary Dhardon said that China’s 3rd cycle of Universal Periodic Review (UPR) due on 6th November this year presents a good opportunity to highlight the human rights situation inside Tibet and strengthen advocacy for Tibet. She remarked that China’s policy of rights wherein it considers development much more important than basic human rights is not only a concern for Tibet but also against the UN’s fundamentals of human rights.

She stated that instead of discussing China’s present policies and its problems “we are committed to requesting member States to engage with China and make China accountable” under the UN Human Rights system. According to her, the Tibetan goal is “to ensure that the human rights situation in Tibet remains atop the UPR agenda”. “UN agenda in the long run as redressing the rights violations in Tibet has the potential to create change for a larger human rights situation in China”, added Secretary Dhardon.

“China has failed to implement even the simplest of provisions to protect Tibetans’ rights including the recommendations accepted in both previous UPR cycles. Furthermore, China’s tactics to silence criticism of its behaviour have been even more aggressive, so we need to press governments harder and ensure that they robustly scrutinize China in this UPR,” concluded Secretary Dhardon.

Referring to China’s constant ignorance towards the civil society efforts at the UN, Taisuke Komatsu warned “hostility and denial attitude” from China in the upcoming UPR. He further elaborated the recent concluding observation of UN Committee on Elimination of Racial Discrimination (CERD) in China.

Both the speakers jointly called on UN member states and civil society to actively participate in the upcoming third cycle of China’s Universal Periodic Review (UPR) and urged the member states to critically and constructively engage with China in upholding universal human rights protection and promotion mechanisms.