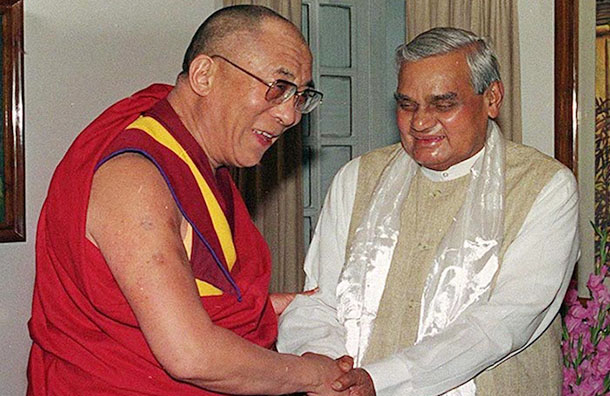 The former Prime Minister Shri Atal Bihari Vajpayee receiving His Holiness the Dalai Lama who called on him in New Delhi on July 3, 2001. Photo: File

Dharamshala, India — Calling him "a truly dedicated politician", the spiritual leader of Tibet, His Holiness the Dalai Lama has expressed profound sadness at the death of former prime minister Atal Bihari Vajpayee, who passed away on Thursday at the age of 93.

Following the announcement this evening that former Prime Minister had passed away on Thursday, His Holiness the Dalai Lama wrote to Shri Vajpayee’s foster daughter, Smt Namita Bhattacharya, to express his condolences.

He breathed his last at 5.05 pm on Thursday. Vajpayee was admitted in AIIMS on 11.06.2018 and was stable in the last 9 weeks under the care of a team of AIIMS doctors,” read the statement released by AIIMS.

In his condolence message, His Holiness the Dalai Lama noted the former Indian Prime Minister "regularly took Indian governments to task in parliament, prompting them to take a stronger stand on Tibet.”

The Tibetan Nobel Peace Laureate who has had several encounters with the Indian leader, noted the warmth of his passion for the country and people. The founder-builder of the party, which is now the ruling party in India was praised by His Holiness the Dalai Lama on Thursday who called him “a truly dedicated politician.”

“I feel privileged to have known him and am honoured to have counted him as a friend,” he said, adding: “We met regularly during the course of his career and I continued to visit him at home after he retired."

The spiritual leader of Tibet noted that what endeared the three-time Indian Prime Minister to Tibet and its people was “His eloquent support of the Tibetan people began in the late 1950s." "Since then, he regularly took Indian governments to task in parliament, prompting them to take a stronger stand on Tibet,” he added.

The spiritual leader concluded his tribute to the Indian statesman by offering condolences to his relatives, friends and colleagues.

As a poet, journalist and a brilliant orator, Vajpayee not only nurtured the BJP as a national party but also rose above the caste, community and party affiliations to emerge as one of the tallest leaders of the country. Vajpayee first became a member of the Lok Sabha in 1957 and he was the founding president of the Bharatiya Janata Party and chaired its first meeting in December 1980. In 2015.

Vajpayee served as Prime Minister of India for three terms that began in 1996, 1998 and 1999. He was the first non-Congress, non-Gandhi Prime Minister to complete a five-year term. He was awarded the Bharat Ratna, India's highest civilian honour.