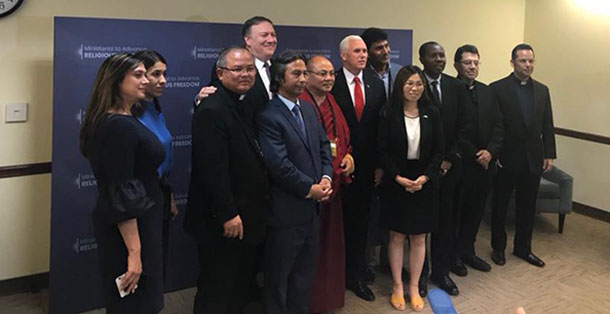 Washington D.C — In a speech at the Ministerial to Advance Religious Freedom, Vice President Mike Pence described the state of religious freedom around the world and said that the Tibetan people have been brutally repressed by the Chinese government for nearly 70 years.

The U.S. State Department convened the inaugural Ministerial to Advance Religious Freedom July 24-26 in Washington, hosting delegations from more than 80 delegations including dozens of minister-level representatives from around the world, in an effort to combat persecution of and discrimination against people of all faiths. On the meeting’s final day, Secretary of State Mike Pompeo announced the event would be held again next year.

While delivering his keynote address on the final of U.S. State Department’s Ministerial to Advance Religious Freedom, he mentioned several of the guests in attendance who had been the subjects of religious persecution in their home countries. He described the state of religious freedom around the world and the wide variety of attacks it faces.

“The list of religious freedom violators is long; their crimes and oppressions span the width of our world,” he said July 26 in Washington. “The victims of religious persecution face economic sanctions. They’re often arrested and imprisoned. They’re the target of mob violence and state sanctioned terror. And all too often, those whose beliefs run counter to their rulers face not just persecution but death.”

Golog Jigme, a Tibetan Buddhist monk who had been jailed and tortured after speaking out against Chinese rule in Tibet, as among a selected group of survivors of religious persecution who met with Vice President and Secretary of State Mike Pompeo.

Pence in his address spoke strongly in support of victims of religious persecutions in different countries. He expressed being honored by the presence of former Tibetan political prisoner and activist Golog Jigme. In recognising Jigme’s courage and stand for liberty Vice President Pence said that for nearly 70 years, the Tibetan people have been brutally repressed by the Chinese government and Golog Jigme’s escape from Tibet and into exile meant that the Tibetan people’s “fight to practice their religion and protect their culture goes on.”

"Sadly, as we speak as well, Beijing is holding hundreds of thousands, and possibly millions, of Uyghur Muslims in so-called 're-education camps,' where they’re forced to endure around-the-clock political indoctrination and to denounce their religious beliefs and their cultural identity as the goal," Pence added.

During a side interaction Jigme shared a moving personal account of having faced persecution from Chinese authorities and urged Vice President Mike Pence to engage with Chinese leaders, to engage with His Holiness the Dalai Lama and to restore religious freedom in Tibet and to find a lasting resolution to the Tibetan issue and allow the Tibetan people to have true religious freedom. He also urged the U.S. to seek the release of Panchen Lama, incarcerated for 23 years.

The first ever Ministerial convened by U.S. State Department saw a gathering of over 400 people; elected officials, international groups, religious heads, civil society members to advance religious freedom around the globe and survivors of religious persecution.

Secretary of State Mike Pompeo announced that this Ministerial would be an annual feature of the US state department. "Ensuring religious freedom around the world is a key priority of the Trump administration’s foreign policy," he said while making his remarks at the close of the Ministerial Advancing religious Freedom, in Washington DC, on July 26, 2018.

"The United States advances religious freedom in our foreign policy because it is not exclusively an American right," Pompeo said, adding: "It is a God-given universal right bestowed on all of mankind. Seventy years ago, the Universal Declaration of Human Rights affirmed this when 48 nations declared that “everyone has the right to freedom of thought, conscience, and religion.”

"We had survivors of religious persecution with us sharing their stories and driving home why this work is so important. The Vice President and I had a chance to sit with a number of them and hear their stories, to talk about why they were working in this field, why religious freedom meant so much to them," Pompeo added.

The Chinese Communist regime in Beijing began their invasion of Tibet in 1949, reaching complete occupation of the country in 1959. Since that time, more than 1.2 million people, 20% of the nation's population of six million, have died as a direct result of China's invasion and occupation. In addition, over 99% of Tibet's six thousand religious monasteries, temples, and shrines, have been looted or decimated resulting in the destruction of hundreds of thousands of sacred Buddhist scriptures.