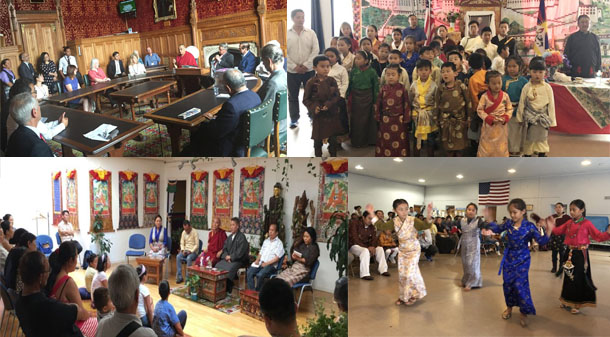 Karma Gelek with the All Party Parliamentary Group for Tibet in London, Karma Yeshi with Tibetans residing in Barcelona and Sonam Topgyal with Tibetan children in Connecticut, US. Photo: OOT/CTA

Dharamshala, India — As a part of ‘Thank you campaign for Tibet supporters’ and 60th anniversary year of the His Holiness the Dalai Lama in exile. Ministers of Central Tibetan Administration are visiting different parts of the world to thank Tibet supporters and various group.

He met with dignitaries, Tibetan diaspora, Tibet support group and visited Tibetan Buddhist centers. According to Office of Tibet London, the Tibetan Minister itinerary include meeting with All Party Parliamentary group for Tibet at Palace of Westminster, where he talked about ‘relevance of Buddhist Traditions to the present world’. He took opportunity to thank UK Parliamentarian and public for their support.

He also met with Tibetan living in UK and urged them to preserve Tibet unique culture and language. He oversaw classes run by London School of Tibetan Language & Culture. Various Tibet supporter group such as Free Tibet and Tibet Fund also met him and interacted.

Home Minister held a meeting with the Tibetan people living in Connecticut, US on July 14, 2018. He greeted the audience of 200 people attending the meeting and gave his public talk reported Office of Tibet Washington.

He spoke on the Middle Way Policy of the Central Tibetan Administration which is a mutually beneficial approach to both Chinese and Tibetans. . “His Holiness the 14th Dalai Lama’s activities and services to the humankind have been, by and large, the greatest compared to his predecessors. Therefore the Tibetan people must rejoice and remember his kindness with great respect,” he said.

His visit to Connecticut followed by visit to Amherst, Massachusetts.

Minister Yeshi visit to Europe took him to Netherlands. He met with Tibetan living in the country. And talked about wide ranging of issues from voluntary monetary contribution, protection of Tibetan language to Middle Way Policy and Five-Fifty vision of Central Tibet Administration. He left for Barcelona, Spainon July, 17 2018 for further official engagement.