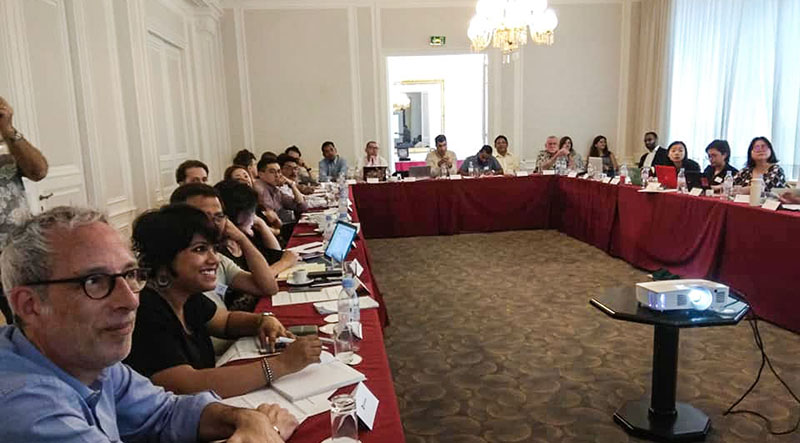 Asia-Pacific correspondents gather for the opening session of the RSF consultation in Paris, on July 4, 2018. Image: David Robie/PMC

“In order to highlight the very serious situation in Tibet, arbitrary arrest, detention, torture and sentencing of Tibetan citizen journalists, crackdown on advocacy of Tibetan language, religious repression and scuffling freedom of expression — Tibet suffered more from human rights violations than any other country,” Yeshe Choesang says: “It appears that many were convicted for “leaking state secrets to outside forces” and “engaging in separatist activities”. ‘Tibet is one of the hardest places for international journalists and outsiders to visit, making the region one of most difficult places in the world,’ he told participants.

“Since 2015, over 50 Tibetans have been arrested on suspicion of sharing or sending information about events in Tibet abroad, with many of them face up to 15 years’ imprisonment for simply sharing information that is critical of state policies,” he said, adding: “Some held in secret locations after being arrested. Chinese authorities continue to refuse to reveal any information about their current health condition and preventing them from contacting their relatives.”

Asia Pacific head Daniel Bastard says the consultation is part of a new strategy making better use of the correspondents’ network to make the impact of advocacy work faster and even more effectively than in the past.

While noting the positive response by UN Secretary-General António Guterres to the journalists’ safety initiative by RSF and other media freedom bodies, Deloire was harshly critical of many political leaders around the world.

He said many ‘nations have been adopting China’s model of stifling dissent through strict control of mass media and censorship of social media, the press freedom index found.’

Highlights of the three-day consultation included a visit to the multimedia Agence France-Presse, one of the world’s “big two” news agencies, and workshops on online security and sources protection and gender issues.

Choesang, Editor in-Chief of the Tibet Post International presented a Souvenir to Christophe Deloire, the RSF secretary general to thank the international media watch-dog on behalf of the TPI on July 4, 2018 in Paris. A document that contains a brief history of Tibet and China’s strict control on freedom of speech and severe crackdown on information sources in Tibet, also submitted to the RSF Asia-Desk.

Choesang is a Tibetan writer and journalist who has been working as Tibet Correspondent of the Reporters Without Borders since 2006.