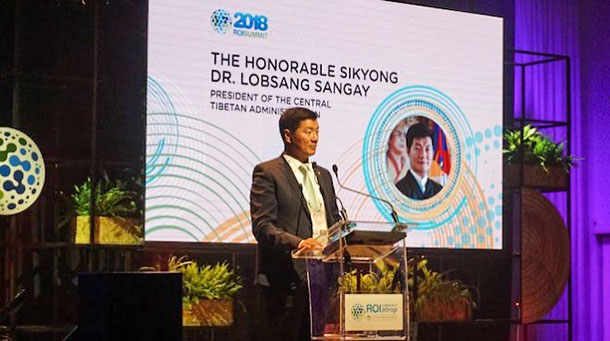 Dharamshala, India — While speaking to major Israeli news outlets, the President of the Central Tibetan Administration reportedly said that people of Tibet want to see their spiritual leader, His Holiness the Dalai Lama back in Tibet, back in the capital city of Tibet, the land of God.

Dr Sangay's first official visit to state of Israel concluded, on June 12, 2018. According to the CTA official media, his visit includes meeting with supporters of Tibet, including academicians, professionals and entrepreneurs. But he did not met any politician and government official. He was invited by the Israeli Friends of the Tibetan People (IFTIP) and supporters of Tibet.

His five-day trip to Israel took him to Western Wall, holiest place where Jews are permitted to pray and Yad Vashem, Israel official memorial to holocaust. Speaking to Israeli newspaper the Jerusalem Post, he said “site’s alternative name is the ‘Wailing Wall,’ because of the millions of people over time who shed tears over the Jewish exile.”

“Every day and every year on Passover you pray, this year in New York or London or where have you, [but] ‘Next year in Jerusalem.’ Then finally that prayer is answered,” Dr Sangay said.

The Tibetan President also relates how Tibetan people feel the same about longing to go home. “We want to see the Dalai Lama back in Tibet, back in the capital city of Tibet, the land of God. We want our living God to be back in the land of Gods. “And that is the prayer. And to think how many hundreds of thousands of Tibetans have died in the last 60 years, praying, dreaming, wishing for the Dalai Lama’s return to Tibet and have not yet been fulfilled,” Dr Sangay told the newspaper.

When asked about the Israel-Palestine conflict, he choose not to comment on the subject but stated he support non-violence and solution through dialogue. He said “As Tibetans, we advocate nonviolence and we practice nonviolence,” he told The Times of Israel in an interview.

The President also addressed the 2018 ROI Summit in Jerasulam last week. An initiative of the Charles and Lynn Schusterman Family Foundation, the summit is an annual convergence of 150 Jewish world’s brightest young minds from around the globe.

This was his first official visit to Israel and was reportedly kept largely low profile. He promised to make another political visit and meet people holding offices.