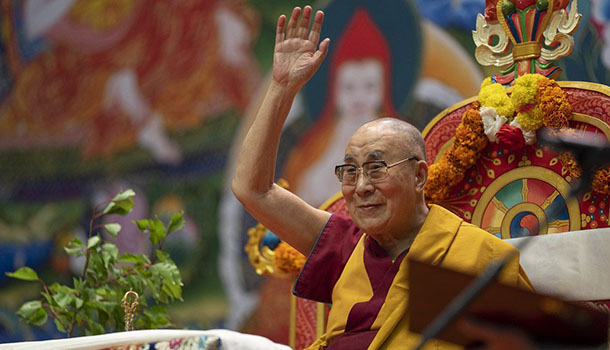 His Holiness the Dalai Lama waving to the audience at the conclusion of his three day teaching in Riga, Latvia on June 18, 2018. Photo by Tenzin Choejor

Dharamshala, India — The Nobel Peace Prize Laureate, His Holiness the Dalai Lama of Tibet will be visiting Netherlands, Germany, Switzerland from 29 July to 7 August to give a series of talks on world peace and compassion, participate in a conference on Non-Violence and Peace, and to give Buddhist teachings.

His Holiness the Dalai Lama is to visit three European countries; the Netherlands, Germany and Switzerland in September to give religious teachings and public talks, and to take part in conferences and other public events. On September 16, the Dalai Lama will deliver a public talk on “Why compassion is essential in our troubled world” at Ahoy Rotterdam, the Netherlands. On the same day, he will give a teaching on Geshe Langri Thangpa’s “Eight Verses of Mind Training” (lojong tsik gyema) at Ahoy Rotterdam.

His Holiness will participate in a conference on Non-Violence and Peace in the morning organized by Tibet Initiative Deutschland and Gaden Phodrang Foundation of the Dalai Lama at Congress Center, Darmstadtium, Germany, on September 19, 2018.

The spiritual leader of Tibet is also scheduled to visit Japan from 14-16 November, 2018. His Holiness the Dalai Lama will teach on Je Tsongkhapa's Praise to the Buddha for His Teachings on Dependent Origination (tendrel toepa) & Kamalashila's The Middle Stages of Meditation (gomrim barpa).

On November 16 morning, His Holiness will confer an Avalokiteshvera Permission Initiation (chenresig jenang). These teachings are being organized at the request of the Liaison Office of His Holiness the Dalai Lama (NPO Tibet House Japan) and being held at the Pacifico Yokohama (National Convention Hall of Yokohama).