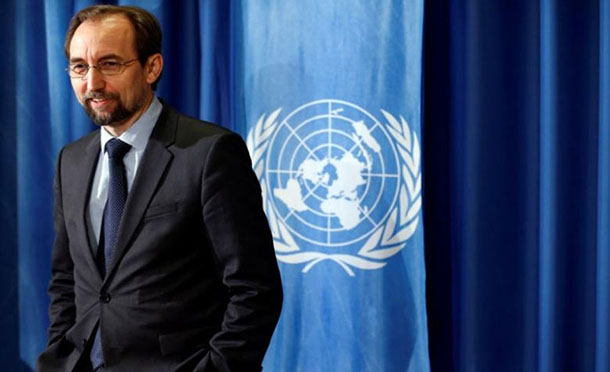 Geneva, Switzerland — The United Nations human rights chief Monday strongly criticised the Communist Regime in China for turning down several requests to unfettered access to the regime, including the occupied Tibet and East Turkestan, where the human rights situation is "deteriorating."

The UN High Commissioner for Human Rights, Prince Zeid Ra’ad Al Hussein made the comments while delivering his opening statement and global update of human rights concerns at the 38th session of the Human Rights Council, in Geneva, Switzerland, on June 18, 2018.

"In China, despite efforts by my Office to establish conditions conducive to an effective dialogue, my staff have not been given unfettered access to the country, including to the Tibet Autonomous Region and the Xinjiang Uyghur Autonomous Region, where the human rights situation is reportedly fast deteriorating," Zeid said in the opening statement.

"Moreover, although two mandate-holders have visited the country in the past five years [since 2014]," the statement said, adding: "China has in that period accumulated more than 15 pending requests for visits."

"I am, furthermore, dismayed by China’s continuing efforts to prevent independent members of civil society from engaging with human rights mechanisms, including Treaty Body reviews, this Council's UPR, and many mandate-holders," the top human rights official stressed.

Zeid Al-Hussein whose term is ending this year said "I encourage the authorities to enable all actors to contribute to all the international human rights mechanisms, and to cooperate with them in a spirit of open and mutual partnership, in order to improve respect for the rights and freedoms of China’s people."

Reflecting on how being in the top UN human rights job had affected him personally, Zeid said that it had been “the hardest, most challenging, most fulfilling responsibility I have held”. He noted that it had affected his relationship with the country of his birth, Jordan, which he had previously represented as UN Ambassador, for seven years up to 2007.

“However, this price is small in comparison to that paid by so many human rights defenders, and civil society more broadly, who sacrifice so much more, again and again, and who to me are the real heroes, genuine heroes of the human rights movement,” the statement added.