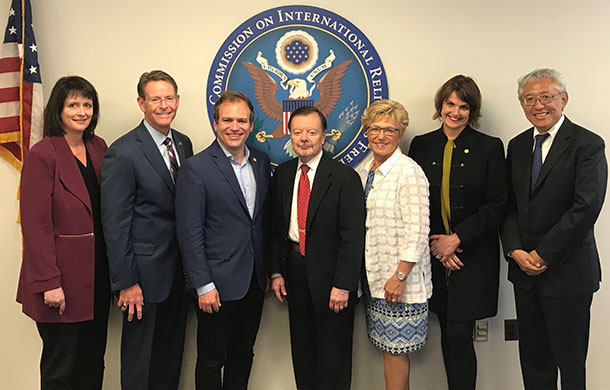 USCIRF is a federal government commission established by the 1998 International Religious Freedom Act (IRFA) that monitors the universal right to freedom of religion or belief abroad.

In a statement, USCIRF said, “In a show of bipartisan collegiality and support for the new Chair, the Commissioners opted to hold the election openly, rather than following the Commission’s usual procedure of voting anonymously by closed ballot.”

Commissioners are appointed for two-year terms, and are eligible for reappointment. In December 2016, Dr Tenzin Dorjee was first appointed as a Commissioner of USCIRF, having been nominated by Democratic Leader Nancy Pelosi. In May this year, the House of Representatives announced his appointment for another term at the Commission.

In reaction to his election, Dr Dorjee said, “It is an honor and privilege to be unanimously elected Chair of the Commission. Our Commissioners bring a diverse array of complementary experiences and skills to the table, and we all share a collective commitment to the promotion of religious freedom or belief for those of all faiths and none.”

He added, “The challenges to religious freedom around the globe are growing on a daily basis, but so too is our resolve to confront these challenges. As the first Tibetan Buddhist elected Chair, I look forward to leading this Commission over the next year in an inclusive way as we provide policy recommendations to the White House, the Secretary of State, and Congress on addressing the global challenges to freedom of religion or belief.”

Dr Tenzin Dorjee is the first Tibetan American and Buddhist to be appointed a Commissioner and also to be elected to serve as chair of USCIRF.

Matteo Mecacci, President of the International Campaign for Tibet, said, “Since his appointment as a Commissioner, we have seen Dr. Tenzin Dorjee playing a very positive and active role in the essential activities carried out by the Commission to promote religious freedom abroad. We have been privileged to work together with Chairman Dorjee and USCIRF on some events on Capitol Hill and found his contribution very meaningful. His election as Chair is also an indication of the increasing role that the small Tibetan American community is playing in the American political system.”