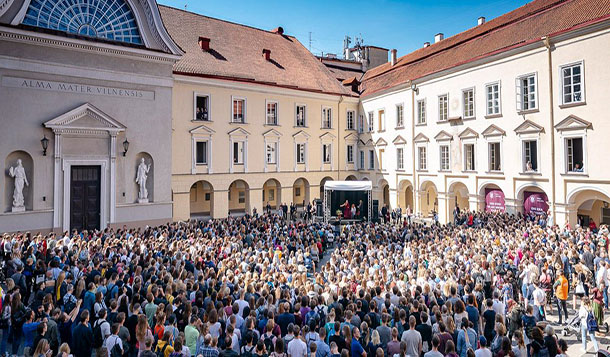 A view of the crowd listening to His Holiness the Dalai Lama at the main square of the University of Vilnius in Vilnius, Lithuania on June 13, 2018. Photo by Tenzin Choejor

Vilnius, Lithuania — "If we are to make the 21st century an era of peace, we have to find ways to reduce the arms trade and eliminate nuclear weapons," His Holiness the Dalai Lama said, adding that "in the short term the power of the gun may seem stronger, but in the long term, as smaller nations like Lithuania have proved, what is stronger is the power of truth."

In his first engagement of the day, His Holiness the Dalai Lama gave an exclusive interview to the lrytas.tv channel, during which three young children had the opportunity to ask him a question. After meeting with members of media, His Holiness spoke to a crowd of over 2000 at the University of Vilnius in Vilnius, Lithuania on June 13, 2018.

Asked how you can be sure you’ve made the right decision about something, His Holiness responded by saying that, “Life is quite complicated. But I use my brain—the human brain has great potential. However, we should not allow our negative emotions to interfere. We should analyze things objectively, examining them from different angles. If you do that, whatever you do will be realistic. We have to use our human intelligence. Then as our self-confidence grows it brings inner strength. “

In the packed lobby of the hotel, more than 60 people gathered to attend His Holiness’s interaction with members of the media. In answer to a question about the goals of education, His Holiness explained, “I consider myself one of the 7 billion human beings. We are mentally, emotionally and physically the same. What’s more, scientists now say they have evidence that our basic human nature is compassionate. That’s a cause for hope. We can see the truth of it in our day to day experience. When our minds are more compassionate, we feel mentally happier and physically well. If we’re constantly angry or afraid, it has the effect of undermining our immune system.

“Everybody wants to be happy—and no one wants to suffer. Yet the majority of the problems we face are of our own making. Therefore, we have to think this through more carefully. When we are young we are generally appreciative of love and affection, but as we grow older we tend to discriminate between ‘us’ and ‘them’.

“The modern education system is very much oriented towards material goals, with little time for inner values. I suggest that just as we observe physical hygiene to maintain our physical health, we also need to cultivate a sense of emotional hygiene to keep our peace of mind. We need to incorporate training about this into our general education.”

Invited to comment on the relative roles of men and women, His Holiness explained how historically, when the criterion for leadership was physical strength, men naturally became leaders. Now, however, education has overcome such distinctions and across the world there is a greater regard for equal rights among women and men. He remarked that where old ways of thinking discriminate against women, we should oppose them. He added that since scientists have shown that many women are more sensitive to others’ pain, they have a special role to play in promoting compassion and human values.

His Holiness was greeted at the University of Vilnius, by an enthusiastic crowd of more than 2000 people. After a short introduction by Prof. Vytis Vidunas, Director of the House of Tibet, His Holiness began his talk. "No one among the 7 billion human beings alive today wants suffering. Nevertheless, despite all major religions teaching about love and tolerance, because we focus only on our own interests, exploiting and cheating others without concern, we create problems for ourselves.

"The 20th century was a period of immense violence because of the tendency to ry to solve problems by use of force. In the interdependent world in which we live today, this way of thinking is completely out of date. On the basis of the oneness of humanity, we need instead to cultivate a sense of global responsibility."

His Holiness declared that if we are to make the 21st century an era of peace, we have to find ways to reduce the arms trade and eliminate nuclear weapons. He remarked that in the short term the power of the gun may seem stronger, but in the long term, as smaller nations like Lithuania have proved, what is stronger is the power of truth.

His Holiness explained that promotion of a more peaceful world on the basis of the human values of loving kindness and compassion is his primary commitment. Next, he is committed to the promotion of inter-religious harmony. He pointed out that in India people of different faiths and points of view have lived together in peace for more than 3000 years. Now, when the population has grown to over a billion, although occasional problems arise, religious harmony continues to flourish, demonstrating to the world that it is possible.

As a Tibetan His Holiness is committed to the preservation of Tibetan culture and the Tibetan language in which it is expressed. He is also deeply concerned for Tibet's ecology, bearing in mind that more than a billion people across Asia depend on the rivers that rise in Tibet for water.

Finally, His Holiness mentioned that he is committed to the revival of ancient Indian knowledge, especially the Nalanda Tradition that was introduced to Tibet in the 7th and 8th centuries. It is his conviction that the view of reality and understanding of the workings of the mind and emotions that it entails remain relevant and of potential benefit in this day and age when the world is caught in emotional crisis.

Answering questions from the audience His Holiness explained that in today's world there is a need for deeper spiritual values based on scientific findings and common sense. He urged the members of the audience to think about what they had heard and investigate what he had said.

From the University His Holiness drove to Tibet Square where he planted a sapling to symbolize friendship between Lithuania and Tibet in the Centenary Year of Lithuanian Independence. He then walked along a nearby canal to see an exhibition of photographs of Tibet by the late Lithuanian writer Jurga Ivanauskaite who wrote several books on the Land of Snows. His Holiness had lunch with the former Mayor of Vilnius, Mr Arturas Zuokas, and invited guests before returning to his hotel.