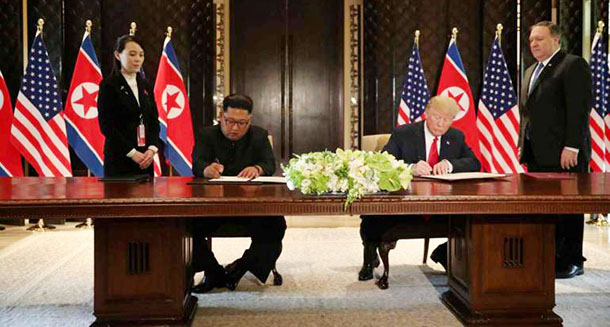 Trump and Kim Jong Un prepare to sign a document at the Capella hotel on Singapore’s Sentosa island on Tuesday, June 12, 2018. Photo: Reuters

Dharamshala, India — Tibetan spiritual leader His Holiness the Dalai Lama issued a statement Tuesday welcoming the summit between US President Donald Trump and North Korean leader Kim Jong Un in Singapore as "an historic summit to secure lasting peace on the Korean peninsula".

“I welcome the initiative that the leaders of the United States and North Korea have begun in Singapore to resolve long standing differences in the hope that it will eventually lead to the denucleaurisation of the Korean peninsula,” His Holiness the Dalai Lama wrote.

“It is my firm belief that dialogue is the only way to resolve problems, whether between individuals or nations. As an avowed campaigner for demilitarization throughout the world, and the complete elimination of nuclear weapons, I wholeheartedly welcome this historic summit to secure lasting peace on the Korean peninsula.”

“I applaud the steps these two leaders have taken. May their efforts encourage further endeavors to dispense with these fearsome weapons of mass destruction with the aim of bringing about genuine and lasting peace in our world,” His Holiness stated.

US President Donald Trump and North Korean Leader Kim Jong-un met in Singapore on 12 June at a historic summit between the two leaders. The North Korean leader, Kim Jong-un, has committed Pyongyang to “work towards” the denuclearisation of the Korean peninsula in an agreement.

Trump and Kim signed the agreement "very comprehensive" document after their summit in Singapore. After the talks, the US president said that the process of denuclearisation on the Korean peninsula will begin "very soon" and the North Korean leader promised to leave the past behind.