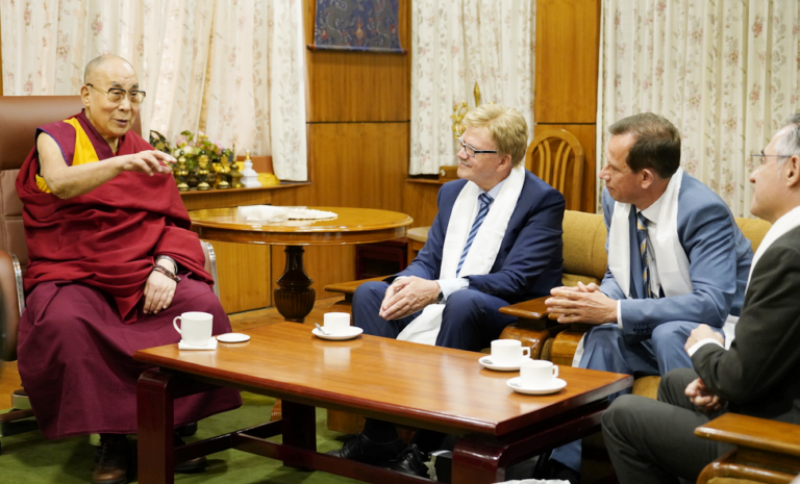 European Parliamentary Delegation including MEP Thomas Mann, MEP Csaba Sogor and MEP Ramon Tremosa receive an audience with His Holiness the Dalai Lama at the latter’s residence, 9 May 2018. Photo/OHHDL

Dharamshala, India — An European Parliamentary delegation reached in Dharamshala, India on Monday on a six-day visit during which its three members met with the spiritual leader of Tibet, His Holiness the 14th Dalai Lama on Wednesday.

A day earlier, the delegation visited the headquarters of the Central Tibetan Administration where the Kashag organised a public felicitation in honour of the visiting delegation at Gangchen Kyishong in Dharamshala, India. The CTA said that the visit is being facilitated by Office of Tibet in Brussels.

Thomas Mann, a Member of European Parliament (EP) and leader of Tibet Interest Group in the EP, is a long-time supporter of the Tibetan cause and last visited Dharamshala in Himachal Pradesh, India in 2016. After meeting with the spiritual leader of Tibet, Thomas Mann reportedly said that the meeting entailed important discussion and marked a special occasion as it coincided with Europe Day.

“In whole Europe, people are celebrating the way of European Union, our values, progress and also our problems. So on this special day, we had the opportunity of meeting His Holiness. He underlined how important the European Union is. Although he knows that we have some conflicts and differences but he said, ‘the most important is what you have done in all the last years… So its most important and your fight for freedom is very important,” MEP Mann said.

“We are very good friends of Democracy and friends of Tibetan people. In all our resolutions, we had the opportunity to support all the people there, Middle Way Approach of His Holiness the Dalai Lama, Tibetan’s right of autonomy and of course the fight against repression on the Tibetan people. We made many resolutions in the European Parliament. It is not only on paper but also for other member states to make it clear that progress for Tibetan people is also progress for democracy worldwide”.

He further added that the meeting entailed discussions on the developments in different countries worldwide. “His Holiness also made it clear that he will visit Germany in September so for me, as German, it was very important,” he added.