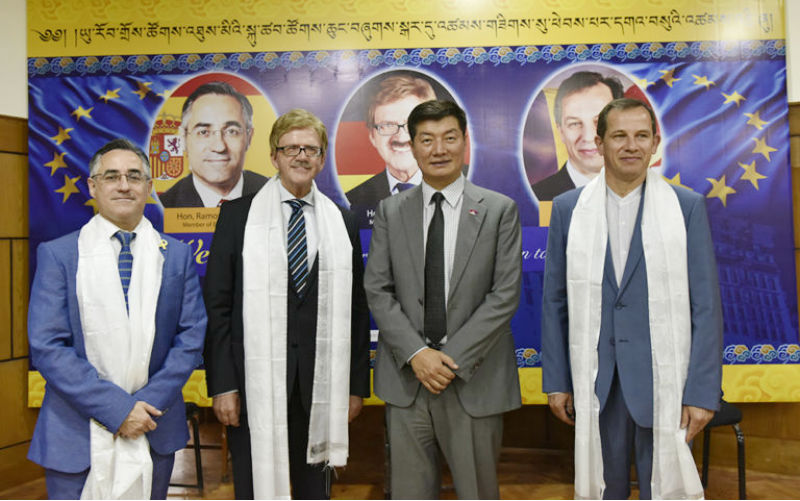 Dharamshala, India — Thomas Mann, chair of Tibet Interest Group in European Parliament, led a delegation to Dharamshala expressing a strong solidarity with the people of Tibet, said, “We want to show our European solidarity to make it clear for your rights, language, culture and fair dealings. We are on your side [people of Tibet], and we will never be silent”.

The Central Tibetan Administration (CTA) Monday held a felicitation ceremony in honour of a delegation comprising three members of the European Parliament visited the headquarters of the Central Tibetan Administration (commonly known as Tibetan Government-in-Exile (TGIE) at Dharamshala in Himachal Pradesh on May 7, 2018 and received an audience with His Holiness the Dalai Lama at the latter’s residence, on May 9, 2018.

MEP Thomas Mann, chair of "Tibet Interest Group" in European Parliament, said, “In March 2016, I was here in Dharamshala as a member of International Election Observation Mission. I was very happy to be at the heart of Tibetan democracy. I saw the engagement of Tibetan people in establishing their own self-elected government and it has increased since many visits”.

Expressing solidarity with the Tibetan people, he hoped that the visit will reinforce the hope and trust of the Tibetan people in the European Union and Parliament. “In EU, we are the voice of human rights and nothing else. In European Parliament, we always have the opportunity to have clear resolutions with big majorities,” he said.

MEP Mann spoke in detail about the China Report which was introduced in EP last year, underlining the Middle Way Approach, reestablishment of dialogue between Tibetan and Chinese representatives, and called out China on climate change.

“We have also condemned the Chinese terrorist laws which legalises violation of rights by government forces against so-called potential terrorist. The European Parliament had a big majority in this case,” he added.

He concluded by saying, “We want to show our European solidarity to make it clear for your rights, language, culture and fair dealings. We are on your side, and we will never be silent”. Thomas Mann is member of the European Parliament from Germany, Group of the European People’s Party (Christian Democrats).

MEP Csaba Sogor, also a member of the Tibet Interest Group (TIG) in European Parliament said, “While fighting for human rights and minority rights inside EU, we will also fight for rights of other minorities and persons out of EU. That’s the reason why I am the co-chair of Ugyur Friendship Group, and as a member of Hong Kong, Taiwan Friendship Power. We try to convince China that if it wants to become a world power, then it should behave”. Csaba Sogor is a member of the European Parliament representing the Hungarian minority.

Offering the example of US electing an African-American origin President after two centuries, he expressed hope that the Tibetan issue will also prevail and China will see a Tibetan president in the future.

Meanwhile, he advised Tibetan people to be prepared for changes unforeseen but dictated by sudden political situations. He recounted the legacy of Alexander Csoma de Kőrös, Hungarian philologist and Orientalist, who authored the first Tibetan-English dictionary and grammar book.

“One of my colleague in the 19th century decided to travel to Tibet to find out the origin of Hungarians. He was convinced that in the holy library in Lhasa he will find some references about the Hungarian and Ugyurs.. He never entered Lhasa but to not waste time, he entered Monastery and studied Buddhist philosophy and language. He is the guy who made the first Tibetan English Dictionary and Grammar, Alexander Csoma de Kőrös… He had a goal and although he couldn’t reach it but in trying to reach the goal, he travelled for more than 20 years and he did very good job for your people and country.

“You never know where you find your goal but be prepared for yourself and for your country. So be prepared when the change will come in Beijing or anywhere in the world. For those who are still studying and pursing your short and long goals, I wish you learn and be prepared for the change,” he said, also adding the importance of keeping oneself abreast with the world organisations, incluidng functions and philosophy of the European Union.

MEP Ramon Tremosa, also a member of Tibet Interest Group in EP, in his address, drew numerous parallels between Tibetan and Catalonian people in terms of its unique language, culture, non-violence policy, also in the colour of Tibetan national flag and the national footbal club, Barcelona. He further added that the Catalonian people can imbibe peaceful resistance from the Tibetan movement.

“There is a parallelism also in this sense that we have to learn to how to deal with issues of having a government in exile and problems as stated by President Dr Lobsang Sangay, of having an exile government and parliament with different views. Also, we have another parallelsim between Tibetans and us; the Catalonian language is now official in Catalonia but was forbidden for centuries,” the MEP said.

Observing the importance of education in nation building, MEP Tremosa said, “A book is much more powerful than a weapon. I invite you to study hard because we must imagine this 21st century in a peaceful way. You don’t see the immediate results but in long term, education will be the power of your nation. So I invite you to study hard because it opens your mind, gives you lot of information and makes you abled to serve your community”. Ramon Tremosa is member of the European Parliament from Spain, Group of the Alliance of Liberals and Democrats for Europe.

Deputy Speaker, on behalf of Tibetan Parliament, also greeted the MEPs and expressed its gratitude for hosting Tibetan parliamentary delegation in Europe last year. “I thank MEP Thomas Mann and Parliamentary groups in the European parliament. Under the guidance, support and initiative of MEP Thomas Mann, who is our close friend, an indeed, faithful and true friend, the third Tibetan Parliamentary delegation was able to tour four different European nations, participate in the hearings and various other engagements,” he said.

The delegation also visited the Tibetan Parliamentary Secretariat and interact with the members of Tibetan parliament.