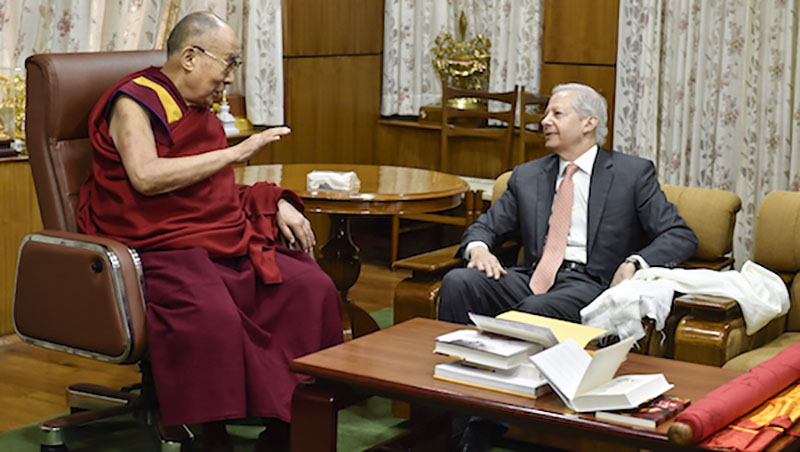 His Holiness the Dalai Lama with US Ambassador to India Kenneth Juster, in Dharamshala, India, May 4, 2018.. Photo: Tenzin Dhamchoe/OHHDL

Dharamshala, India — His Holiness the Dalai Lama Friday met with U.S. ambassador to India Kenneth Juster, who expressed hope afterward that the spiritual leader of Tibet will soon be able to visit again to the United States of America.

Ambassador Juster visited Dharamshala on a two-day official visit from 3 – 4 May 2018. During the two-day visit, the ambassador had an audience with His Holiness the Dalai Lama on May 4 and met Dr Lobsang Sangay, President of the Central Tibetan Administration (CTA) twice.

“The meeting with His Holiness was tremendous. He is a very inspirational figure. We had a wonderful discussion. It would be terrific if he were able at some point to travel to America,” Juster added. He also said that he requested His Holiness the Dalai Lama to visit the United States again in the future.

Asked if he would recommend to U.S. President Donald Trump that he meet with His Holiness the Dalai Lama on his next visit to the U.S., Juster said, “We will see what happens in time.”

The delegation led by Juster was also hosted at a dinner reception by cabinet of the CTA, attended cultural performances by the Tibetan Institute of Performing Arts, and visited the Tibetan Children’s Village school.

Juster was appointed as the US ambassador to India in November 2017. He previously served as the Deputy Assistant to the President for International Economic Affairs and Deputy Director of the National Economic Council in the United States Government from January 2017 to June 2017.