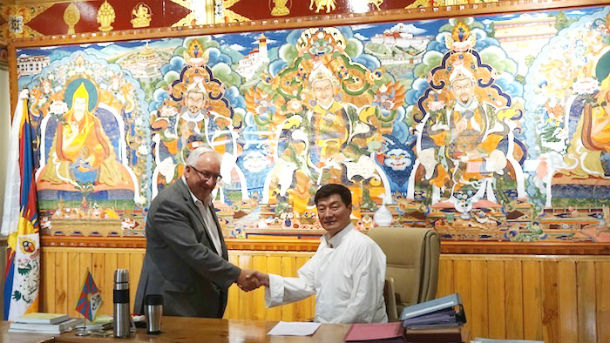 Dharamshala, India — A group of members of parliaments from three nations arrived in Dharamshala, the seat of the Central Tibetan Administration, received an audience with His Holiness the Dalai Lama at his residence here in McLeod Ganj of Dharamshala, India on Friday.

Legislators from Australia, Estonia and Sweden are here to support the Tibetan issue and to observe the exile Tibetan community in Dharamshala and pledged their continued support to the Tibet issue. Michael Danby member of Australian Parliament told the media that he and other MPs had “positive” meeting with the Dalai Lama and that friends of Tibet around the world can help spread awareness on the issue of Tibet.

Danby stressed that the Chinese government should know that the issue of Tibet will not subside through “suppression”, rather reaching out to the spiritual leader of Tibet and his solution to seek meaningful autonomy under China will resolve the issue of Tibet.

He also pointed out that while Xi Jinping has embarked on a “dictatorship” after doing away with the term limit of the presidency, the Tibetan government in-Exile has set their ways democratically through an elected leadership that will carry on the fight until the issue of Tibet is resolved.

"There are 7 million Tibetans who still live in their ancient country, a country that actually pre-dates China. They are not allowed to worship freely, use their own language or observe their own customs or religion by the occupying Beijing communists," Danby said in statement released in March 2017.

Danny also met with Dr Lobsang Sangay, President of the Central Tibetan Administration and other top officials at the Kasha secretariat on April 27, 2018. Danby is current Member of the Australian Federal Parliament; MP; Member for Melbourne Ports, Victoria.

Fellow MP from Estonia Yoko Alender said the “issue of Tibet is an issue about justice” and that as a pro-justice politician, she will work towards spreading awareness on the Tibet issue and the Tibetan exile set up.

Alender said that the past struggle of Estonia for freedom was peaceful and that Tibetans can draw hope from the Estonian freedom struggle. The Estonian MP said that the Tibetans should keep intact their culture, language and heritage while in exile so that these treasures can be brought back to a free Tibet.