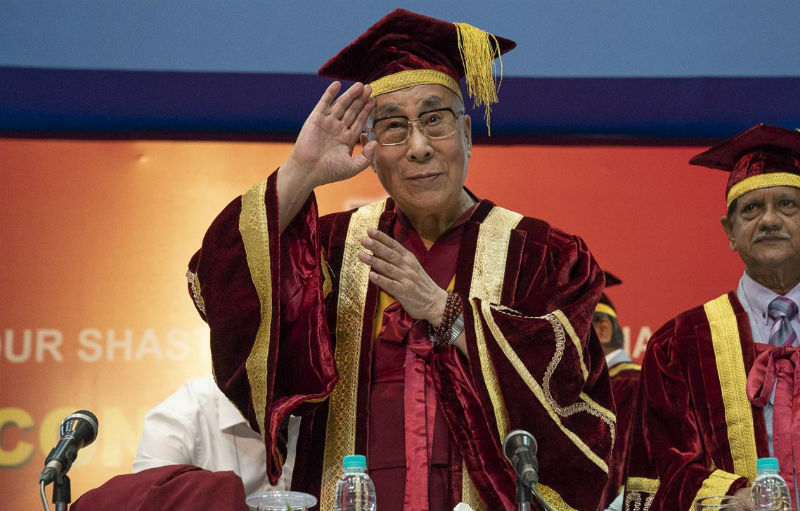 His Holiness the Dalai Lama waving to the audience as he takes his seat at the dias at the start of the Lal Bahadur Shastri Institute of Management Convocation in Delhi, India on April 23, 2018. Photo by Tenzin Choejor

New Delhi, India — "Welcomes" North Korea's Kim Jong Un's announcement on halting nuclear tests and expresses optimistic over upcoming talks will lead to the establishment of trust between the two Koreas, the spiritual leader of Tibet, His Holiness the Dalai lama said in a statement on Sunday, Apr 22, 2018.

"I welcome North Korea’s announcement that it will halt nuclear and missile tests with immediate effect. I am particularly encouraged that this move is taking place in the context of efforts to achieve agreement through dialogue," His Holiness said in the statement.

"It is my hope that the forthcoming meeting between the two Korean leaders, followed by a summit with the President of the USA, can take place in a spirit of amity, compromise, and transparency, enabling the resolution of past disagreements," the statement said, adding: "I am optimistic that these talks will lead to the establishment of trust between the two Koreas resulting ultimately in the denuclearization of the Korean peninsula."

"Such a process, if successful, can serve as the model of a human approach to peace in the region. This in turn will have a deep impact on the elimination of nuclear weapons worldwide," it added.

"As an avowed campaigner for demilitarization throughout the world and the elimination of all nuclear weapons, I hope these positive developments will contribute to concerted efforts to do away with these dreadful weapons and secure genuine and lasting peace in our world," the statement further said.

North Korean leader Kim Jong Un on Saturday said he would halt nuclear tests and intercontinental missile launches, in a Saturday announcement welcomed by US President Donald Trump ahead of a much-anticipated summit between the two men.

The state-run Korean Central News Agency reported that the North Korean leader had decided to suspend all nuclear and missile tests. “The North will shut down a nuclear test site in the country’s northern side to prove the vow to suspend nuclear testing,” added the KCNA report. It stated that the decision took place at the plenary meeting of the central committee of the ruling Worker’s Party of Korea (WPK) on Friday.

South Korean President Moon Jae-in has welcomed North Korea's announcement on Saturday that it will halt nuclear and missile tests and scrap its nuclear test site. Moon was speaking at a meeting with his aides on Monday. He said he highly values the North's decision as an act of good faith ahead of the inter-Korean summit and a planned North Korea-US summit.

Welcoming the announcement, the executive secretary of the Comprehensive Nuclear Test Ban Treaty Organisation (CTBTO), Lassina Zerbo said, “This is a strong signal and an important step in the right direction”.

North Korea is among 44 countries listed in Annexe 2 of the CTBT, whose ratification was compulsorily required for the multilateral pact to enter into force. According to Wire report, DPRK, along with India and Pakistan, are the only Annexe 2 countries who have never signed or ratified the agreement. China, Iran, Israel, Egypt and United States have signed the document, but not ratified it so far.