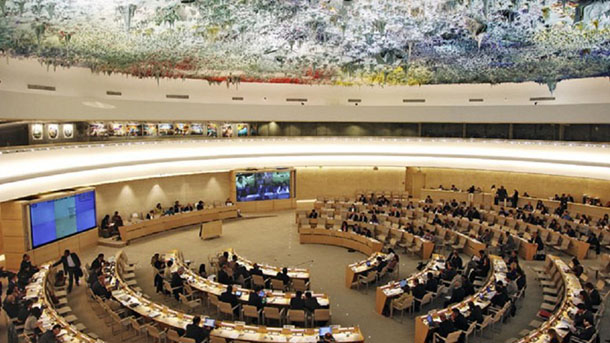 UN Human Rights Council is a United Nations System inter-governmental body responsible for strengthening the promotion and protection of human rights around the world. Photo: File

Dharamshala, India — Amid systematic, widespread and gross human rights violations, over six decades in Tibet, the situation in the region has degenerated into a climate of fear, while 'China’s development goals are systematically violating the economic, social and cultural rights' of the people of Tibet, a new report to United Nations has found.

The Universal Periodic Review (UPR) brings the attention to the Communist Party of China’s failure to implement certain measures included in the last periodic review, as well as new violations relating to environmental degradation and excessive surveillance and persecution of civil society groups in Tibet.

The report highlights how the Chinese Communist Party continues to maintain that the road to protecting human rights in Tibet is via an aggressive economic development plan, despite clear evidence the latter is hindering cultural rights and creating the very ethnic grievances the PRC claims to want to avoid. This plan involves rapid industrialisation and forced migration of rural-based Tibetan societies into cities, sometimes even outside of Tibet.

Many Tibetans find this lifestyle hard to adapt to. A classic example is the forced resettlement of nomad Tibetan populations. A Human Rights Watch (HRW) report showed massive migrations of nomads towards urban areas. Through further investigation, the report found that they had been asked to do so by the Chinese government, with no alternative proposed. Nonetheless, the rapid urbanisation-industrialisation has failed to take into account the law of unintended consequences and has only worsened the situation of Tibetans.

While economic marginalisation is coherent, the report says: What is more, many of the Tibetans relocated for development purposes do not have the Han-based skillset required to work in heavily industrialised, urbanised settings. Language is for instance increasingly used as a barrier rather than an integration tool. Furthermore, the relocated families are confronted with challenges such as the rising cost of living that makes the pressure of urban life far more difficult for them to bear than for recent Han immigrants.

As a result, China continues to export its spare workforce to Tibet to work in mines. Although China claims that Tibetans will benefit from rapid development due to new employment opportunities, their own companies’ show that only 35% of the workforce is Tibetan, the report said, adding: Another increasingly relevant aspect of China’s development policy in Tibet is the way it is restructuring the Tibetan economy to be almost fully dependent on central government subsidies.

Despite the Tibetan Autonomous Province’s name, its autonomy is totally undermined by the direct rule of the communist party and the lack of Tibetan representation therein. Its autonomy to decide upon the use of its own resources and inability to self-subsist means any relaxation of institutional measures would still have to overcome the economic structures put in place to ensure that the Party is totally dominant in all aspects of Tibetan life.

On top of this, and because of mining and dam-building activities, Tibet is undergoing land erosion and water pollution, potentially harming its citizens’ livelihoods. Given China’s commitment to more hydropower in light of the Paris Accords, it is essential they introduce local actors as stakeholders before fully engaging in mass infrastructural projects, it said, while criticising growing environmental crisis in the region. The report makes clear that protecting the environment is as much about protecting eco-systems in line with human rights as it is about hitting CO2 emission targets.

The report strongly condemns the Chinese government's continued lack of freedom of religion and expression in Tibet. It added: Undoubtedly the most controversial and publicised part of the report is the escalating amount of self-immolations, especially among the monks and nuns of Tibet. Of a reported 152 self-immolations in protest of harsh anti-religious measures by the Chinese Communist Party , just under half were undergone by monks and nuns.

This is referencing in particular the wave of religious building destructions by the central government, as well as the tightening of surveillance of religious leaders and ‘’zones’’ in places like Lhasa. Religious ‘’troublemakers’’ are regularly expelled without an objective trial, or forced into a “patriotic education” program. Some of these measures are not just reserved for the religious establishment. In fact, many activists, journalists and social movement leaders are forced to repatriate to other provinces in China and sometimes placed under house arrest.

Recommendations in UPR's report, it calls on the Chinese government to ensure measures are taken to preserve the economic, social and cultural rights of Tibetans, to stop forced evictions, the continued surveillance and the environmental degradation, and to reintroduce fair trials to those it accuses of destabilising the state.

If China is to play a leading role in an increasingly multi-polar world, it is essential it takes its commitments to the international community seriously. It cannot continue to maintain that ‘’outgrowing’’ any social or human problem is a viable solution given this has not changed the state of Tibetan society and as the report shows it has mainly benefitted people outside of Tibetan society.