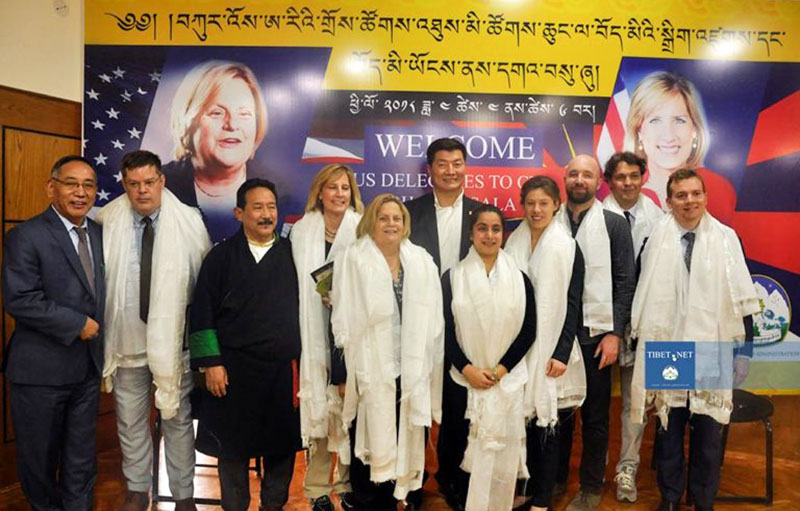 Dharamshala, India — Top Tibetan officials led by President Dr Lobsang Sangay received a delegation from the U.S. Congress, on a three-day visit to Dharamshala, India, the seat of the Central Tibetan Administration (CTA) and His Holiness the Dalai Lama, to reiterate the strong support for Tibet.

In his welcome address, President Dr Sangay expressed his gratitude to the United States government and the Congress for their continued bipartisan support to the Tibet issue. He said 'the presence of the two US congresswomen at the Tibetan Administration today lends credence and credibility to the voice of Tibetans inside Tibet who have been suffering for too long under the China.'

Dr Sangay described the harmonious blend of the three pillars of Tibetan democracy and the resulting vibrant democratic functioning of the Tibetan administration. President also reportedly 'confessed to the fact that the CTA is an administration with zero corruption, thanks to the rigorous auditing and verification system of the administration.'

Briefing about the evolution of Tibetan democracy from the early stages of Tibetan exile to the complete devolution of political authority by His Holiness the Dalai Lama in 2011, the Tibetan President informed the delegation about the ‘Thank You India’ programme being organised by the CTA to express gratitude to India for sixty years of assistance and hospitality.

Ileana Ros-Lehtinen, the most senior U.S. Representative from Florida, in her address, said that the US congress understands the issue of Tibet and that it’s working side by side with the CTA and other organisations in a cooperative manner to formulate a US policy in support of the people of Tibet. Speaking about her own family’s experience of living under a communist regime in Cuba, she stressed that the experience has taught her what it’s like to be bullied by a communist regime like the one in Beijing. “And this experience has made fighting back against these oppressive regimes one of my highest priorities,” she said.

She strongly condemned China’s repressive restriction on the Tibetan people’s right to travel, a restriction which is also imposed on US citizens who wants to travel to Tibet to help the Tibetan people. She further rebuked China’s attempts to censor Tibetan language, religion and the destruction of Tibetan monastic centers. She called China’s interference in the Tibetan reincarnation system particularly in the reincarnation of His Holiness the Dalai Lama as ‘insulting’ and ‘illogical’.

Referring to the US Congressional gold medal awarded to His Holiness the Dalai Lama, she said that the conferment of the medal to His Holiness symbolises the United State’s expression of solidarity and support for the Tibetan people in their struggle.

She also promised to propose a bill in the congress to pressurise China to resume dialogue with His Holiness the Dalai Lama for a resolution of the Tibet issue and the release of all political and religious prisoners. She further promised to exert effort for the appointment of a special coordinator for Tibetan issues in the state department and for the passage of the Reciprocal access to Tibet bill sponsored by Congressman Jim McGovern.

U.S. Representative Claudia Tenney spoke about the 'legacy of the Tibetan struggle and urged the younger generation of Tibet to move forward with pride and dignity to fulfill their destiny of freedom and respect for human rights. She also promised to continue supporting the Tibet issue in the US Congress.' Topgyal Tsering, Secretary of the Kashag Secretariat, delivered the vote of thanks at the welcome reception for the US Congressional delegation.

According to the CTA, 'the delegation is accompanied by Mr Nathan Gately; Ms Sadaf Khan, Victoria Marun, ICT President Matteo Meccaci, Richard A Fishel from the US embassy in New Delhi, and Thomas Kress from USAID India, along with OOT Washington Representative Ngodup Tsering and former Representative Kasur Tempa Tsering.'