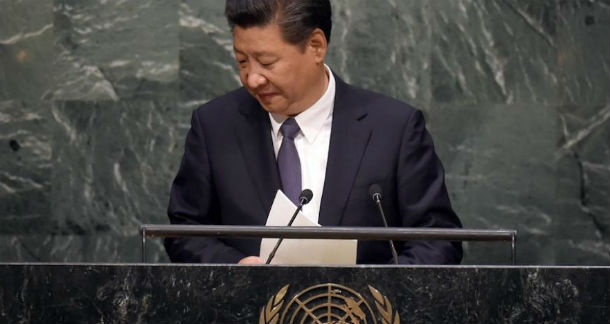 China's communist dictator, Xi Jinping, who sought to set himself up as ruler for life by abolishing presidential term limits. Photo: File

In a submission to a UN human rights panel, Reporters Without Borders (RSF) has called for the government of the People’s Republic of China to stop flouting press freedom and to release the approximately 50 citizen-journalists currently imprisoned in China.

An independent international press freedom NGO with consultative status with the United Nations, RSF has just submitted its recommendations on China to the UN Human Rights Council in Geneva, which will conduct a Universal Periodic Review (UPR) of China’s human rights performance in the autumn.

RSF’s leading recommendation is the immediate and unconditional release of the 50 or so journalists and bloggers currently held in Chinese prisons, ten of whom are in a real danger of dying because of a deliberate policy of mistreating detainees and depriving them of medical attention.

RSF also calls on the Chinese government to stop flouting its own constitution, of which article 35 guarantees “freedom of speech [and] of the press,” article 37 bans “unlawful detention,” article 38 guarantees “personal dignity,” article 39 declares the homes of its citizens to be “inviolable” and article 40 guarantees the “privacy of correspondence.”

Under the UPR process, the UN Human Rights Council periodically reviews each UN member state’s human rights performance. When China was last reviewed in 2013, the Chinese government undertook to improve respect for press freedom but the situation now is in fact much worse than it was five years ago.

In his first five-year term, President Xi Jinping has placed both state and privately-owned media under closer Communist Party control, and has developed Internet censorship and surveillance to an unprecedented level.

In 2013, the Chinese government agreed to recommendations calling on it to begin the process of ratifying the International Covenant on Civil and Political Rights, which bans torture and guarantees the dignity of detainees.

China is far from keeping this promise: citizen-journalists are now among the leading victims of a government practice known as “residential surveillance at a designated place,” under which dissidents are abducted, held incommunicado and tortured.

RSF is also concerned about the danger of China spreading its repressive model to other countries. The Chinese government is promoting its “new information order” more actively abroad, an order based on censorship and surveillance that leaves no room for journalistic ethics and the public’s right to independently reported news and information.