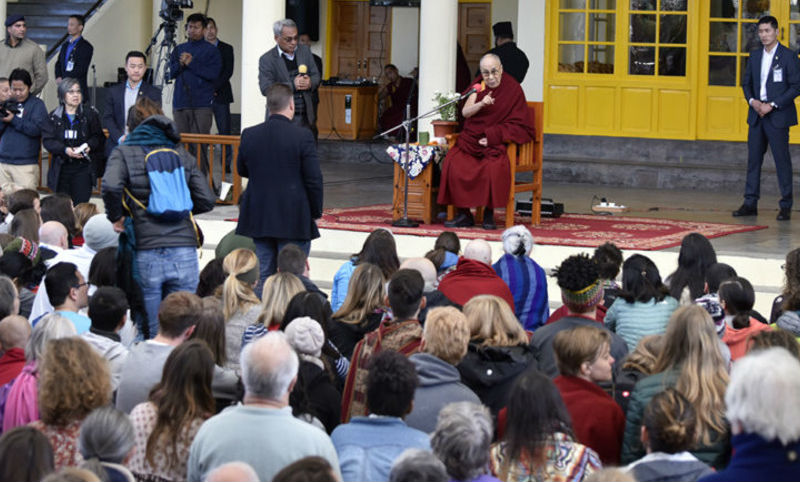 His Holiness the Dalai Lama hosted more than 600 foreigners for a private audience on March 5, 2018. Photo: OHHDL

Dharamshala — More than 600 people from over fifty different countries attended the audience His Holiness the Dalai Lama held especially for foreigners visiting Dharamshala on Monday, March 5, 2018.

His Holiness gave a short teaching to the foreigners before taking group photos with all the visitors from their respective countries.

Addressing the audience, His Holiness began, “My number one commitment is to promote the sense of oneness of entire 7 billion human being. We are same, physically, mentally and emotionally. Too much concern on nationality and religion is outdated."

He pointed out that current reality of climate change and interconnectedness of global issues have rendered the concept of national boundaries absolutely irrelevant.

“We have common responsibility towards the wellbeing of entire human beings,” he added.

“In the early part of the 20th century, when one nation declared war on the other, every citizen joined the war effort. This has no longer been the case from the later part of the 20th century. Many Americans were against the Vietnam War and during the Iraq War, millions expressed their desire for peace. So humans, I feel, are becoming more mature and reasonable in their thinking,” he said.

"Peace is the basis of happiness, development; war, on the other hand, is the seed of destruction and suffering."

Responding to a question on future of mankind, His Holiness explained that basic human nature is scientifically proven to be more compassionate, and therefore, is the basis of hope for a better, peaceful humanity. “On future of the humanity, I feel very much optimist. So I make some effort as my share as one of the 7 billion human being,” the spiritual leader added.

“In order to bring change, we must make efforts now; not through prayers but actions. The 21st century should be a century of dialogue. When we face different interest, potentially causing violence, we must solve through dialogue”.

His Holiness also told his audience that due to increased physical tiredness, he has had to cancel his long distance travels. “Therefore people from far places, who have come here, it is my duty to meet them."