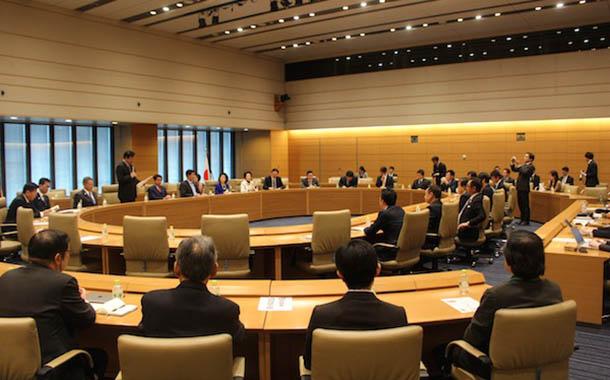 Members of the All Party Japanese Parliamentary Support Group for Tibet during President Dr Lobsang Sangay’s visit to the Parliament in Tokyo on February 20, 2018. Photo: OOT Japan

Tokyo, Japan — "As China got away from Tibet, today it is thinking that it can away with South China Sea, East China Sea, Senkaku Islands and Doklam region," President Dr Lobsang Sangay Wednesday told a group of nearly 100 Japanese parliamentarians from the All Party Japanese Parliamentary Support Group for Tibet, which is world's largest parliamentary support group for Tibet.

"Similarly, those countries normally stand for human rights and justice are increasingly dictated by China. So it all started with Tibet," said Dr Lobsang Sangay, President of the Central Tibetan Administration. He visited the Japanese Parliament and applauded the increase in the numbers of members in the All Party Parliamentary Tibet Support Group from 87 to 90, which is world's largest parliamentary support group for Tibet, according to the Office of Tibet, Japan.

On his arrival at the Parliament, Dr Lobsang Sangay was accorded a warm welcome by executive member representing all the political parties of Japan led by former Education minister and member of the ruling Liberal Democratic Party of Japan, Mr Shimomura Hakubun.

Later, as Dr Sangay entered the auditorium, the Japanese MPs accorded standing ovation to welcome him as he entered the Parliament's meeting hall decorated with the flags of Japan and Tibet.

In his opening remarks, Mr Nagao Takashi, LDP, Secretary of the All Party Japanese Parliamentary Support Group for Tibet, said it is an honour to have the President of the Central Tibetan Administration Dr Lobsang Sangay visit the Japanese Parliament.

Mr Nagao underlined the need to come up with concrete and meaningful measures to support and alleviate the suffering of the Tibetan people by resolving the issue of Tibet through the Middle-Way Approach.

In his address, Mr Shimomura Hakubun, Member of House of Representatives and former Minister of Education, who is also the President of All Party Japanese Parliamentary Group for Tibet, said "the Tibetans have been following peace and non-violence as their guiding principles in the last thousands of years of their history. Tibetan Buddhist culture is very relevant and has immense potential to contribute to peace and non-violence to the world which is facing war and violent conflicts."

He underlined the need to strengthen the efforts of the All Party Japanese Parliamentary Support Group for Tibet, towards the resolving the issue of Tibet through Middle Way Approach. He said the number of MPs taking interest and concern in the issue of Tibet will increase in the days to come.

Ms Sakurai Yoshiko, a veteran journalist and head of think tank, Japan Institute of National Fundamentals, stressed the need to support the cause of the Tibetan people. "The culture and Buddhist religion of Tibet has tremendous potential and relevance to the promotion of peace and non-violence in the world."

She said Japan, which shares same Buddhist religion followed by the Tibetan people, has the immense potential to support the cause of Tibet. Our support for Tibetans would contribute to our efforts to uphold the principle of peace and non-violence, she added.

The president congratulated the All Party Japanese Parliamentary Support Group for Tibet on the increase in the number of its members from 87 to 90 after the recent election win by prime minister Shinzo Abe-led Liberal Democratic Party. Currently, 49 members are MPs from Liberal Democratic Party. "It is only the biggest parliamentary support group for Tibet, but now the strength of the members have also increased. Whenever I visit America and Europe, I always feel proud to say that Japan has the largest parliamentary support for Tibet."

Dr Sangay said the US has adopted Tibet Policy Act and the European Parliament has many passed many resolutions supporting the preservation of Tibetan identity and dialogue between His Holiness the Dalai Lama's envoys and the Chinese government to seek genuine autonomy for Tibet, which is in line with One China policy.

He appealed to the Japanese Parliament to make effort to adopt a resolution to support preservation of culture and education of Tibetans, and dialogue between His Holiness the Dalai Lama's envoys and the Chinese government to resolve the issue of Tibet through the Middle-Way Approach.

The President also spoke in detail about the deteriorating situation in Tibet and the destruction of Larung Gar and Yachen Gar Buddhist Academy by the Chinese government in Tibet.

"The world compromised on Tibet when it was invaded by the People's Republic of China. As China got away from Tibet, today it is thinking that it can away with South China Sea, East China Sea, Senkaku Islands and Doklam region. Similarly, the normally countries like Sweden, Norway, Denmark and Australia which normally stand for human rights and justice are increasingly dictated by the Chinese government. So it all started with Tibet."

"Therefore, the world has no choice. Either you have to transform China into a liberal democracy or you get transformed and become like China," Dr Sangay said.

He said One Belt One Road initiative of China is similar to what the Chinese Communist party did when they first came to Tibet in the name of peace and prosperity for the Tibetan people. They promised to bring one road and we lost our country. Tibetans are paid silver coins to built that road through which the Chinese government brought trucks, guns and tanks and that is how we lost our country.

Instead of peace and prosperity for Tibetans, the Freedom House Index lists Tibet as one the three least free regions in the whole world after Syria. Similarly Reporters Without Borders said in its report that for journalists to access to Tibet is more difficult than North Korea.

"I hope what happened to Tibet does not happen in Japan and I come to Japan to remind that," the President said.

Following the talk by Dr Sangay, Mr Baba Noboyuki, Chief Secretary of All Party Japanese Parliamentary Forum, gave the concluding remarks, urging the members to make strengthen their effort to support the issue of Tibet.

Ms Matsukawa Rui, member of the Liberal Democratic Party, shared Dr Lobsang Sangay's concerns over the Chinese government's overwhelming pressure on the affairs of countries around the world.