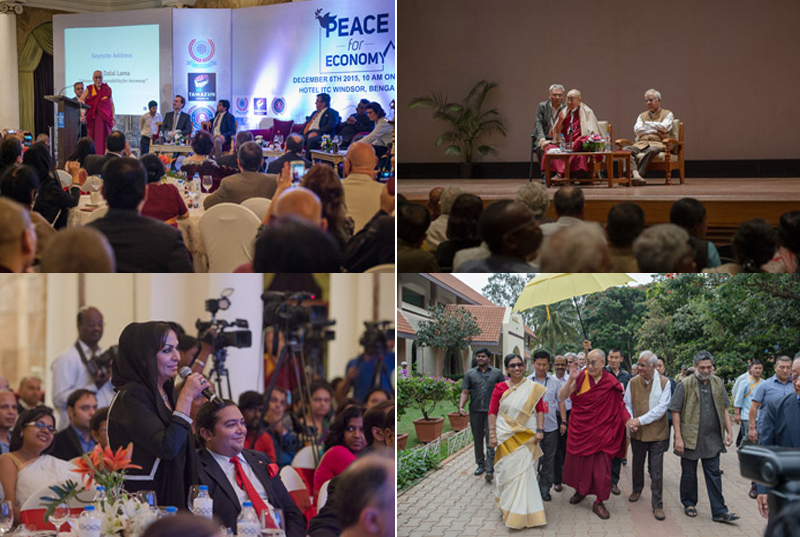 Bengaluru, Karnataka — Speaking to the National Institute of Advanced Studies in Bangaluru City in Soutt India, His Holiness the Dalai Lama said the mental experience is far more effective than sensory experience. Therefore, to be happy we need inner strength and self-confidence.

His Holiness on December 6, 2015, addressed representatives from nearly twenty countries at a gathering of the Diplomatic Consular of Karnataka. Sabit Subasic, Ambassador of Bosnia & Herzegovina introduced His Holiness, describing him as a symbol of hope, brightness, justice and humanity.

"Dear brothers and sisters whenever I meet people, I always consider them to brothers and sisters. In ancient times the idea of the oneness of humanity was something people might refer to in their religious prayers, but it didn't have much relevance to their daily lives," His Holiness told the group.

"Today, the oneness of humanity is a living reality. Conflict arises when we dwell too much on secondary differences between us: nationality, faith, whether we are rich or poor, educated or uneducated. Instead we should remember that we are all human beings. We were all born from a mother and nurtured by her milk," he said, adding that "this is true even of troublemakers like Stalin and Hitler. All appreciate affection and are capable of showing affection to others."

His Holiness went on to note that "Scientists have conducted experiments on infants and established that they clearly respond favourably to images of others being helped and flinch from images of harm. Different experiments have shown that constant anger and fear disrupts our immune system. From these findings they conclude that basic human nature is positive and compassionate, which gives me hope."

On the topic of non-attachment and being a Buddhist, His Holiness said, "I reflected too that I am a Buddhist, but that I shouldn't become attached to Buddhism, which would introduce a sense of bias. What is important today is that we consciously cultivate a sense of the oneness of humanity because we all depend on each other. This naturally gives rise to a sense of universal responsibility. In this context, given the current refugee problem in the world, to remain indifferent would be immoral."

His Holiness also discussed how developing a lasting peace and the issue of climate change some of several areas we must realize that we have a shared experience, "An example of the importance of recognising that we all belong to one human family, is that in discussions about what to do about climate change, we can no longer put national interests ahead of the global interest. We will only create a more peaceful and harmonious world if we adopt a peaceful approach by engaging in dialogue."

His Holiness also spoke about the issues of intolerance, the tendency to generalize when it comes to religious groups or nationalities, and the role of women. Consistent with what he has said and written before about all these topics, His Holiness wondered if the world would be a better place if more women were in positions of power, that the diversity in India stood as a model of how intolerance could be overcome and the dangers of attributing to many the isolated actions of a few extremist who happen to share a faith. In concluding, His Holiness emphasized that Peace is a result of action and that the nations of the world just take the initiative to create the circumstances to bring this about.

That afternoon His Holiness spoke at the National Institute of Advanced Studies. NIAS is a centre of higher learning engaged in interdisciplinary and multidisciplinary research in natural sciences, social sciences, arts and humanities and founded by JRD Tata.

His Holiness began his talk by saying that: "I often ask myself what is the purpose of our lives and conclude that life's purpose is to be happy. We have no guarantee what will happen in the future, but we live in hope. That's what keeps us going. Contrary to popular belief, the ultimate source of happiness is not a wealth of material goods but a mental feeling of joy. There is sometimes insufficient understanding of the difference between sensory consciousness and mental consciousness. Material things provide some satisfaction, but it is generally short-lived. Such satisfaction does little to allay anxiety and fear. On the other hand, mental joy sustains itself."

Referring to a meeting with a Catholic monk who had spent 5 years meditating on love in Montserrat near Barcelona, Spain. His Holiness stated, "What I conclude from this is that mental experience is far more effective than sensory experience. Therefore, to be happy we need inner strength and self-confidence. And it seems to me that warm-heartedness is the source of that inner strength."

Answering a question about developing a meditation in a busy world, His Holiness replied that most people could find an hour or half an hour a day if they chose. He clarified that there are two major kinds of meditation. Shamatha or concentration requires a quiet place and a certain posture, but vipashyana or analytical meditation, thinking things through and analysing them, doesn't demand such requirements. He also discussed the dangers of mixing faith with attachment and emphasized that forgiveness does not mean accepting wrongs, but showing genuine compassion to the wrongdoer.

His talk ended with a message for all people? His Holiness said that India has long upheld traditions of ahimsa, non-violence, and inter-religious harmony, and today what was important was to combine these traditions with modern technology to further positive development.

When it was brought to his attention that Mrs Raja Ramanna, widow of the great scientist, who was also the founder director of NIAS was in the audience, he told her:

"I really admired your husband. He once told me that although quantum physics represented a new body of knowledge, he had been pleased and surprised to find corresponding insights in the writings of Nagarjuna that preceded it by nearly two thousand years. He told me that, as an Indian, that made him very proud."