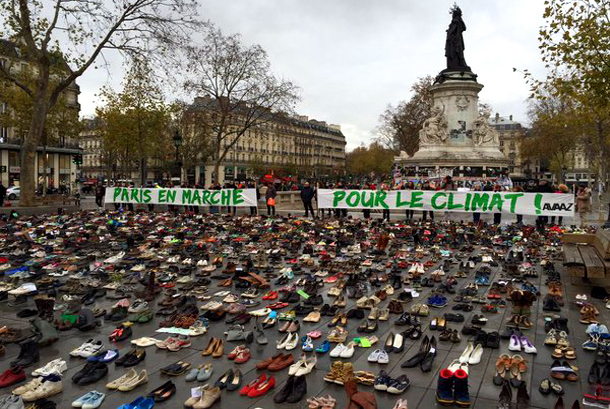 Paris, France — 195 countries and nearly 150 world leaders are gathering in Paris, the French capital, on Monday, for the UN climate conference known as COP21, aimed at forging a deal to limit global warming to 2C.

The leaders will converge in the north of Paris for the talks in a venue bristling with tight security and protected by some 2800 police and troops.

Hundreds of Tibetans and supporters took part in the first ever climate rally in New Delhi, for Tibet coinciding with the global climate rally taking place across the globe on the eve of UN COP21 summit in Paris.

Scientists warn that unless action is taken soon mankind will endure ever-worsening catastrophic events, such as droughts that will lead to conflict and rising sea levels that will wipe out low-lying island nations.

Tibetans beleive that "the impact of climate change in Tibet is harsh. As the world focuses on climate action at United Nations' COP21 meetings, Tibet should be central to any progress made."

They are urging the world leaders that "the Tibetan Plateau needs protecting, not just for Tibetans, but for the environmental health and sustainability of the entire world. As stewards of their own land, Tibetans' expertise should be part of tackling climate change."

Tibetans are not alone, thousands of environmental activists from all over the world hope that the images from the United Nations conference will send a powerful message of unity on the issue of global warming.

Each leader will give a speech about what their countries are doing to reduce emissions and slow climate change. After the leaders leave, negotiators have two more weeks to work on a deal before the talks are scheduled to wrap up December 11.

All members of the G-20 have submitted their own plans for addressing global warming. The Obama administration laid additional groundwork last year by securing an agreement with China to cut carbon emissions drastically by 2030 and a deal with Brazil to increase renewable energy production.

Activists expect that the plan that emerges from the Paris summit will address a decrease in fossil fuel emissions and increase financing to help the developing world reduce its dependency on nonrenewable energy.

His Holiness the Dalai Lama recently urged strong global action to limit global warming and to protect fragile environments, including the Himalayan glaciers and Tibetan plateau. Calling climate change a “problem which human beings created,” the Tibetan spiritual leader said all of humanity was now responsible for taking action. But instead, he said, “we are relying on praying to God or to Buddha. Sometimes I feel this is very illogical.”

America's target is based on the plan already announced in China last year to reduce emissions by 26 to 28 percent below 2005 levels by 2025. Still, the warm glow over such steps can only last so long, environmental activists say.

Climate Action Tracker, which has analyzed all of the plans submitted, writes that "none of the G20 INDCs are in line with holding warming below 2 degrees Celsius, or 1.5 degrees Celsius," which is the global goal of the climate talks. That is also the point at which climate experts say "severe drought, rising seas and supercharged storms as well as food and water security become routine challenges."

The United Nations has hosted annual summits to tackle the vexed global warming issue since 1995, but all previous efforts have foundered, primarily due to deep divisions between rich and poor nations.

Many poor nations insist rich countries bear the most responsibility for tackling the problem because they have burnt the most fossil fuels since the Industrial Revolution on their way to prosperity.