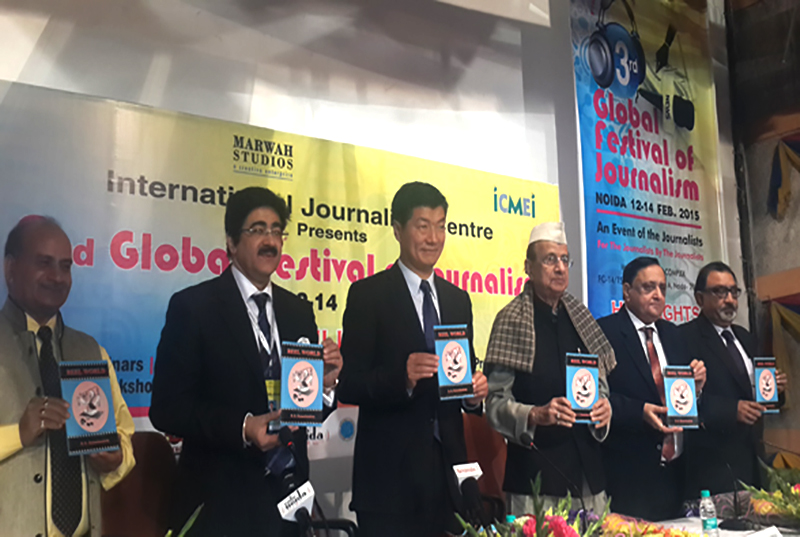 The formal inauguration of 3rd Global Festival of Journalism Noida 2015 took place on the International Day of Journalism, February 12, 2015.

"I am overwhelmed by the novel idea of Sandeep Marwah who has brought the world journalism to think about peace," said Dr Lobsang Sangay, while inaugurating the 3rd Global Festival of Journalism at Noida Film City.

"It is the need of the hour; no country can prosper unless and until the people of the nation are at peace. It is necessary to spread peace and make sacrifices for it," added Sangay.

'Peace does not just an absence of war, violence cannot solve violence Sikyong said that gave a mathematical data of increasing terror acts over the years despite curbing it by forces. He said that 'non-violence should be an antidote of violence.'

The media is a driving force for the justice for humanity, Sikyong said, adding that it should give equal focus on peaceful non-violent struggle around the world. The Tibetan struggle which is consistently based on non-violence for many decades is not getting the desired headlines.

Giving focus only on violent struggle Sikyong feels could leave an impression on the other oppressed and marginalised groups to resort to violence to attract media coverage.

The Sikyong stressed on the importance of journalism in the society, saying it creates awareness among the public. "Journalism is an important media and has made public awareness and social messages reach the masses," he said.

Sikyong praised India for its democracy and unity in diversity. "India is huge country having different cultures and its unity attracts all over the world. It is country of Mahatama Gandhi who preached non violence and respect for all religions," he said. "Teachings of Mahatma Gandhi are still valid in this age. Believe in him and things will progress towards prosperity," said Dr Bisham Narayan Singh, Former Union Minister and Governor of Tamil Nadu.

The festival opened with a tribute to the most celebrated cartoonist R.K. Laxman. A book written by his brother Ramachandran featuring his cartoons and published by Research Centre of Asian Academy of Film & Television was released in his honor.

"Good journalism and ethical reporting by media can transform the outlook of the world," said Sandeep Marwah, President of Marwah Studios and International Journalism Centre, while conducting the program. Sandeep Marwah is also the president of Asian Academy of Film & Television.

Later, Sandeep Marwah honored Dr Lobsang Sangay with the life membership of International Journalism Centre. A poster on 'Global Peace' was also released on the occasion.

The 3rd Global Festival of Journalism Noida 2015 is the leading journalism event in India. It is an open invitation and an opportunity to network with the best from the world of journalism. Delegates from over 30 countries of the world and from all the states of India have made the festival most exclusive and one of its kind in the world.