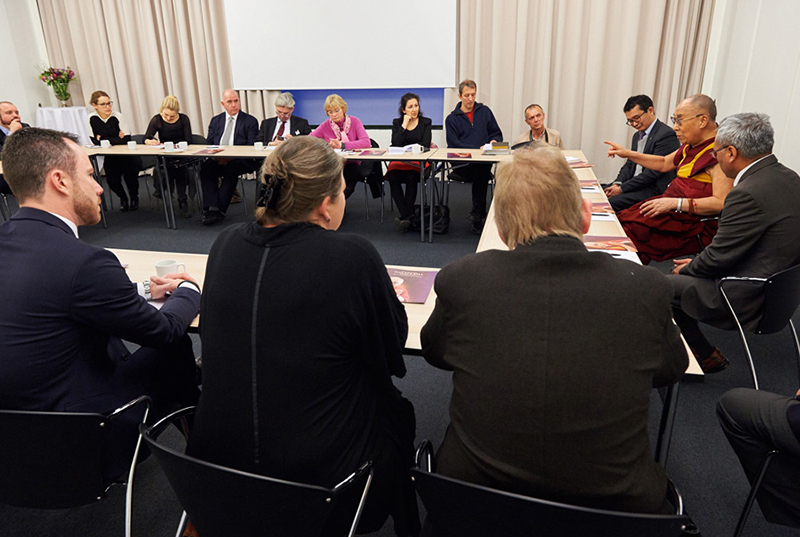 Copenhagen, Denmark: - During a meeting with a group of Danish Parliamentarians in Copenhagen, the Capital of Denmark on February 11, His Holiness the Dalai Lama praised them for their stance on "human rights in Tibet and elsewhere in the world."

The group representing all eight parties present in parliament met His Holiness the Dalai Lama on Thursday. He greeted them saying: "In 1973, as I was about to set out on my first trip to Europe, the BBC correspondent Mark Tully asked me why I was going and I told him that although I was a refugee I considered myself a citizen of the world."

"I have a commitment to promoting human values such as love and compassion, which rather than money or power, are the real source of peace of mind. Looking inward brings inner strength and self-confidence, which enables us to work transparently, openly and honestly," he said.

Remarking that all human brothers and sisters want to live a happy life he teased the parliamentarians that they seemed to be human too. As a Buddhist monk he is aware of religious traditions' common aim to help and serve humanity, which is why he seeks to foster harmony between them.

The Nobel Peace Prize laureate told the group that he is now fully retired with no political responsibilities regarding Tibet. "I appreciate your support and your concern for human rights in Tibet and elsewhere in the world."

With regard to his homeland, His Holiness expressed concern for the ecology of the Tibetan plateau, labelled by one Chinese ecologist, the Third Pole. Asia's major rivers rise in Tibet affecting the lives of 1 billion people downstream. He hoped the parliamentarians would support experts making an objective assessment of the current ecological situation there.

He also expressed concern for the well-being of Tibetan culture, which, as a culture of peace and compassion, is something China also needs. He recalled a meeting with Chinese writers and intellectuals who told him that moral standards in China were lower than they had been for 5000 years. Xi Jinping recently mentioned in Paris and New Delhi the important role Buddhism has to play in reviving Chinese culture.

The Tibetan spiritual leader said, 'India and China, the world's two most populated nations, are neighbours. As long as China views Tibetans with suspicion she will continue to station large numbers of troops there. These troops are a source of apprehension on the Indian side. Therefore, normalizing the situation in Tibet has a bearing on peace in the region.'

Asked what Denmark and the EU can do to support self-determination in Tibet, His Holiness told the parliamentarians that China is increasingly important economically and militarily. There is no point trying to isolate her. Reach out, make friends, overcome her suspicions, he said, remarking that this is true of Russia too.

He reiterated his judgement that censorship is wrong, that the Chinese judiciary needs to be raised to international standards, because at present no one represents the peasant farmers.

When one member of the group voiced the paradox that His Holiness counseled them to reduce Chinese suspicions and yet merely meeting with him might stoke them.

"You can report what we discussed about the environment, that we are not seeking independence, that what we seek for Tibetans are the rights already provided for in the Chinese constitution. Don't worry, we've had relations with the Chinese for more than 2000 years and I've been dealing with them since the 1950s."