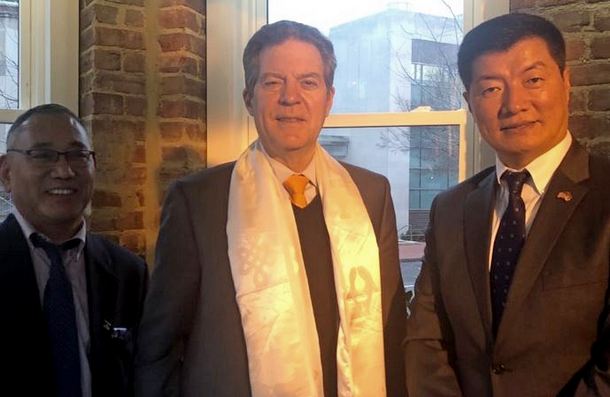 Washington D.C. — President of the Tibetan government in-Exile, Dr Lobsang Sangay met Sam Brownback, the United States Ambassador at Large for International Religious Freedom, in Washington D.C, the Capital of the United States, on February 12, 2020. The President was accompanied by Ngodup Tsering, Representative of His Holiness the Dalai Lama for North America during his official tour through the country.

Sam Brownback who is Ambassador at Large for International Religious Freedom at the U.S. State Department, visited Dharamshala, India, where he met with His Holiness the Dalai Lama on October 28, 2019 and said the main purpose of his visit was to tell the world—especially China—that America supports the Tibetan people and that the right to determine the Dalai Lama’s successor lies solely with him and with the Tibetan Buddhist community, not with any outside government or entity.

President of the Central Tibetan Administration Dr Lobsang Sangay arrived in the U.S Capital for a series of imperative meetings this week. Representative Ngodup Tsering, Secretary Tashi Dhondup, and Kelsang Dolma were at the airport to greet President (Sikyong) and Sonam Wangdak, according to the Office of Tibet, Washington, D.C.

The OOT says President's goal was to conduct official meetings with as many important members at the Senate, House of Representatives, State Department, and various NGOs. His first meeting was with Pema Tulotsang, a member of the National Endowment for Democracy. The two discussed ways to which the visions of the Central Tibetan Administration could be elevated through future events and collaboration with the NGO.