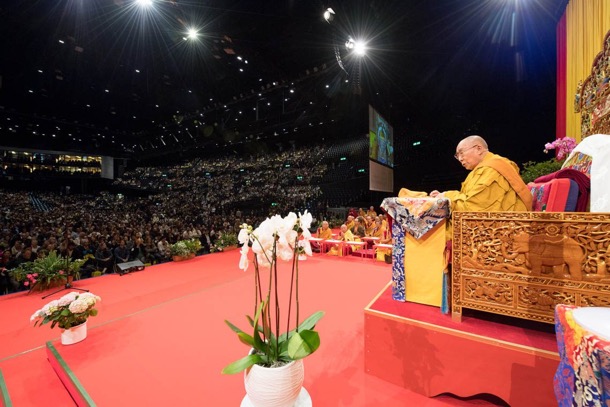 His Holiness the Dalai Lama's teaching at the Zurich Hallenstadion in Zurich, Switzerland on September 23, 2018. Photo by Manuel Bauer

Members of the Tibetan community in Switzerland welcomed His Holiness in a traditional way. A group of youths performed Tashi Shölpa, an auspicious Tibetan dance and then made offerings of Chema Changpu, according to the Tibet Bureau Geneva.

His Holiness also has further engagements with press including an exclusive interview with Swiss National Television (SRF).

As requested by the host of the visit and the Tibetan community in Switzerland & Liechtenstein, His Holiness will preach on Nagarjuna’s - The Precious Garland of the Middle Way (Uma Rinchen Trengwa), Kamalshila’s - The Middling Stages of Meditation (Gomrim Barpa) & Gyalsey Thokme Sangpo’s - Thirty-Seven Practices of a Bodhisattva’s Way of Life (Laklen Sodunma). The teaching will start at 9:00 am (Central European Standard Time) on 23 September, Sunday morning, at Zurich Hallenstadion, one of the largest indoor multifunctional venues in Switzerland.

On the morning of 24 September, His Holiness the Dalai Lama will also appear in a discussion on “Universal Human Values and Education” at Zurich University of Applied Sciences (ZHAW), one of the leading universities of applied sciences in Switzerland.