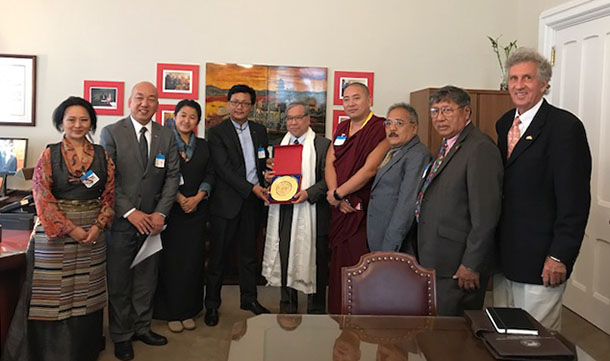 Ottawa, Canada — On the third day of Tibet advocacy in Canadian Capital Ottawa, members of Tibetan Parliamentary delegation met Canadian MPs from the Senate Committee on Human Rights and the Parliamentary Friends of Tibet in Ottawa, on June 13, 2018.

'The Tibetan Parliamentarians discussed many important issues and apprised the Senator and the MP that Tibet is not accessible to outside world and Canadians, especially Tibetan Canadians are not allowed to visit Tibet to meet their families and relatives,' according to the OOT Washington DC.

"They urged the lawmakers to adopt reciprocal measures to counter such action by the Chinese Government reasoning that reciprocity is the basis of diplomatic relation," it said.

The Parliamentarians were taken on a guided tour of the iconic parliament building and visited Canada Tibet Committee Office. In the evening, Office of Tibet hosted a dinner reception for President Dr Lobsang Sangay and the Tibetan parliamentary delegation.

The delegation comprised members from the Tibetan Parliament in-Exile namely; Mingyur Dorjee, Tenpa Yarphel, Pema Chagzoetsang, Namgyal Dolkar, Tsewang Rigzin and Dhondup Tashi. During their official visit to the Canadian Capital, the Tibetan delegates met with Senator Ngo, Member of Senate Committee on Human Rights, in the morning and called on MP Randall Garrison, Co-Chair of Parliamentary Friends of Tibet in the afternoon at the Parliamentary Hill in Ottawa.