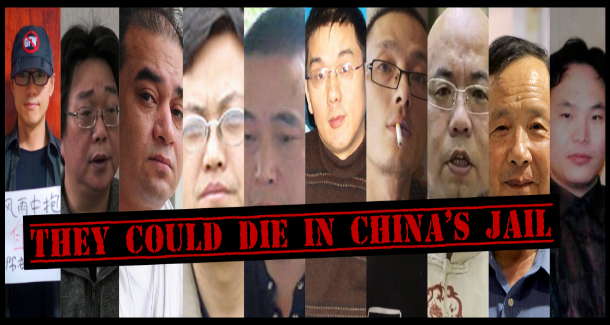 At least 10 citizen-journalists could die in China’s jails. Photo: RSF

After President Xi Jinping last week gave himself the constitutional power to rule indefinitely, Reporters Without Borders (RSF) points out that more than 50 journalists and bloggers are currently jailed in China – some serving life sentences – and that ten of them could die prematurely as a result of the conditions in which they are held.

The Chinese authorities no longer sentence press freedom defenders to death, but they deliberately mistreat them and deprive them of the medical attention they need while in prison.

The Nobel peace laureate Liu Xiaobo and the dissident blogger Yang Tongyan both died last year from cancer that was left untreated in detention. Liu Xiaobo’s widow Liu Xia, who is suffering from depression and a heart condition, has been denied contact with the outside world for eight years although no charge has been brought against her.

To draw the international community’s attention to the fate of journalists and bloggers imprisoned in China, RSF is publishing a list of ten leading detainees who are in danger of dying as a result of mistreatment and a lack of medical care.